Eddie Burbanks was transferred from Denaby United to Sunderland in 1935 for £300.

From Wikipedia, the free encyclopedia: 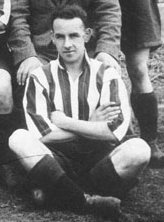 Eddie Burbanks (1 April 1913 – 26 July 1983) was an English footballer who played for Sunderland as a left winger. He was born in Campsall, Doncaster
Burbanks made his debut for Sunderland on April 27, 1935 in a 4-1 win against Portsmouth at Roker Park, where he scored one goal.

In Sunderland’s first FA Cup win in 1937, Burbanks scored the third goal to wrap up the victory. In his 156 appearances for Sunderland, he scored 30 goals.
He played also in Leeds United (1953–1954) when he became (until today) the oldest player to have ever played for the club when he captained the side against Hull on 24 April 1954. In 13 appearances with the Elland Road club he scored 1 goal.

40 years 15 days
Eddie Burbanks may no longer be a City record holder but he continues to hold a place in the club’s history books after starring in a much-cherished generation. Burbanks joined his close friend Raich Carter in making the move from Sunderland to the newly-built Boothferry Park in 1948 and his wizardry on the left flank installed him as an instant favourite. Burbanks’ first season in East Yorkshire ended with the Division Three (North) title and he was also part of the side that almost upset Manchester United in the FA Cup quarter-finals in front of Boothferry Park’s biggest crowd. Burbanks eventually left City in 1953 after a total of 153 appearances, again joining Carter, who had taken charge of Leeds United. His final game for City came in a 1-1 draw at home to Leicester in April 1953.
>