Even Battle After Early Shocks. 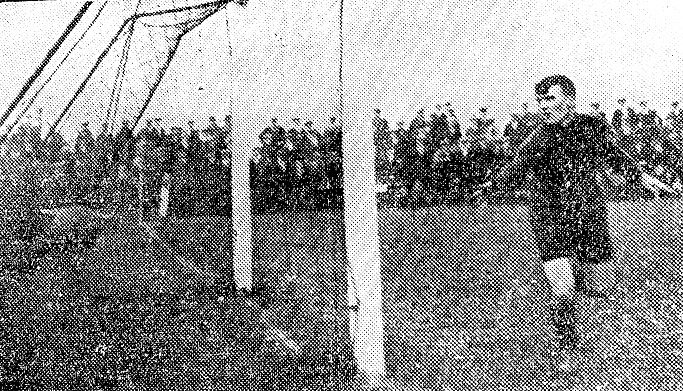 Easily the biggest crowd at Tickhill Square this season watched the Denaby-Mexboro’ battle to decide, as a wag put it, “which of the teams should appear at Wembley.”

After a game which fluctuated greatly the four thousand odd spectators left wondering what the result of the replay would be. The game started sensationally. From the kickoff Denaby took the initiative and, after three minutes the lead. Fisher stung the ball in from the right and Tye waiting for the bounce, attempted to punch clear, but HARGREAVES had run in and he flicked the ball into the net with his head—receiving at the same time the full force of Tye’s punch. He did not resume for a few minutes.

However disheartening this early reverse was to Mexboro’ supporters it did not upset the team, and the play was soon transferred to the Denaby half. Five minutes later Mexboro’ got level. DENMAN headed in a corner kick from Nutter. After fourteen minutes Mexboro’ went ahead. Wilson took the ball up and centred splendidly for BUNGAY to shoot past the helpless Brannan.

The Mexboro’ forwards were very good at that stage and their smooth advances always looked dangerous. Denaby were all out for an equaliser and when Pratt drew Tye it looked as though they were going to get it, but Pratt shot high over. A few minutes later Tye brilliantly saved a hard drive by Gilchrist and Brannan saved from Doman and Bangay.

The strenuous efforts of the Dena by forwards were rewarded after 32 minutes when PRATT levelled the scores with a ball that glanced in off an upright. The Mexboro’ goal had one or two narrow escapes after that. A miss by Vollans was specially noticeable. Bungay fell heavily just before the interval and badly hurt his arm. In the second half he was virtually a passenger and changed places with Wilson. As in the first half play was even and both sides would have scored but for good goalkeeping. Tye was brilliant and thoroughly atoned for his shaky opening. Brannan was cool and made masterful clearances.

Denaby fielded their best side this season Taylor and Ashall were steady and gave nothing away. The backs were workers, if uninspired. Hargreaves was an inspiration to the forward line and the neatness of his footwork was a delight. He brought out the best in Pratt and that young player has not played a better game for Denaby. Vollans was not an ideal centre-forward, which is not his position, but he was thrustful and distributed the ball well.

The Mexboro’ forwards combined well and the introduction of Denman was successful. He was the hardest worker on the field and his headwork was noteworthy. Bungay was doing well when he was injured, and Wilson was the best winger on the field. Nutter was good when he headed straight for goal , but often his play lacked directness . The Mexboro’ halves were good up to a point, but Dennis has played better and Lanceley tired towards the end. Davis got through a lot of work. The backs tackled well and both kicked a good length, but were at times a little slow in recovery. Evans showed greatly improved form.

The official receipts were £95.