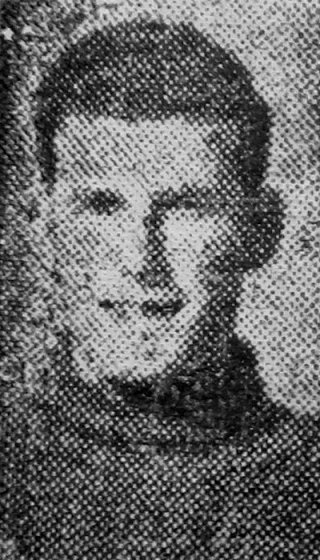 Never, perhaps, in lifetime, will the vagaries of football produce guite another match like this. Not in twenty years of Midland League football at Tickhill Square can I remember one so packed with excitement, and, as it proved, so remarkable.

After A Slow Start.

United, after a slow start, went ahead in the 17th minute through a brilliant header by CLARK, a precision touch to an excellent cross by Platts. It was entirely a surprise for a smooth, methodical and workmanlike Notts County had always looked the more likely to score. In their direct and purposeful football the intelligent and dangerous Roby, notable figure on the County right wing, had always been a worthy foeman for the tenacious Lockwood.

But that goal was an incentive United needed. They held their lead until the 62nd minute, when County centre-forward Evans was brought down and County were awarded a penalty. BRUNT scored with a gem of a shot.

Now, more than ever, United playing brilliantly as at any phase of the afternoon, It was anybody’s game. Then, in the 68th minute, Lee, with his shoulder to the ball, was adjudged to have handled and County were awarded a second penalty. Once more the excellent BRUNT converted the award into a goal—and County were ahead for the first time—with 22 minutes to go.

The Tickhill Square roar simmered for ten minutes. In the 78th minute goalkeeper Bradley was drawn out of his charge. ROWNEY, who had played with splendid energy throughout the match, robbed him and scored a beauty with the backs in hot pursuit of a losing ball. And with 12 minutes to go we really sat back for our surfeit of excitement.

The climax came with four minutes to go. For in the 86th minute yet another penalty for “hands” was awarded against Denaby, but this time the excellence of Mayhall outshone even the brilliance of Brunt, for the Denaby goalkeeper became the man of the match in these dying minutes by parrying a rocket shot, listing out the return high above a crowd of heads, and so saving a point so richly earned.

It was a climax to a game which will be a talking point at Denaby so long as soccer is played at Tick-hill Square.

There is nothing wrong with United on this performance. They gave a remarkable account of themselves against one of the most impressive sides we have had at Tickhill Square this season.