The Denaby supporters were given an unexpected feast of goals on Saturday when Castleford the to the Denaby ground and work obviously beaten by 5-0, a handsome set off to the 5-2 by which category won the corresponding match on the Weldale ground. It was a bleak, bitter afternoon, with little son, and a searching eddying wind. The ground was in capital condition, however, and there was a fairly good attendance, perhaps 1500. The crowd got their money’s worth as something over, though they had rather a long time to wait for it.

Denaby had to take to fill without Bromage, the goalkeeper, and Bussey the centre forward, and they made at with Allen and Kilner, the latter coming in at outside right, so that person moved to the inner position, and Brayshaw did duty in the centre.

Castleford had the Bramall Lane “star,” Harold Gough* in goal.

Denaby completely dominated the game from start to finish. Within three minutes of the start Cook had tested Allen sharply with a hot drive which the youngster fielded and cleared beautifully. He was never again troubled and it was not until the close that he was called upon to act in any capacity.

Ashmore won the toss and set Denaby to defend the cricket and, taking advantage of the wind insofar as a had any help to offer. Denaby set up a long series of attacks the monotony which was frequently broken by “alarums and excursions”

In the first half alone Denaby forced a dozen corners, and scarcely one of them was wasted. That is they were all well planted and each time the Castleford goal had a narrow escape. Gough showed himself a master of his art almost from the first moment that he came into action. Almost, but not quite, for when he was first called upon, to clear a centre from Cooper, he under valued the agile Pearson a little while he was coolly manoeuvring for a clearance, the little Denaby forward nudged him and dispossessed him, promptly hooking the ball across the vacant goal, Fawden was well up but but his header was hasty and the ball went over. Thereafter Gough was not to be caught napping, though he was giving mountain of work and was more than once bundled into the net, so hot was the siege. But the ball was always well away and Denaby’s chances like that of Macbeth’s witches, “made themselves air.”

Dick Ashmore once went ploughing right through and did not stop until he and Gough were mixed up together in the back of the net – but the ball was not there. Gough also had to deal with one or two shots, one from Ewden and another from Windle. The Denaby right half was a sixth forward and he and Pearson were constantly brewing mischief.

Inspired by the courage and science of Gough the Castleford defence for a long time was firm and stout, and as the half went on the intensity of the Denaby assault began to slacken and the tide to ebb. Still Denaby were held at bay throughout the half, and had to come off without the goals for which they had worked so strenuously.

It was thought that the change of ends in favour Castleford, but not individually, Denaby took up the running where they left off, and they had not much longer to wait for their reward. The second of eight minutes old when Ashmore set Pearson going and he sent across to Cooper, fire back at centre that beat the feel. Kilner with a rare burst of speed, caught it as it going out, and passed it back to Pearson, who banged in a powerful low drive which brought the great Gough struggling to the ground. Brayshaw rushed up and kicked it out of his hands into the net. It was Pearson’s goal virtually if not actually, and it appeared from the stand to pass over the line before Brayshaw reached it.

The effect of this success Castleford was more marked than on Denaby. The Castleford backs and arms are been holding on by sheer force of faith in Gough, and with this faithdispelled they quickly weakened and in the end collapsed. Throughout the second of golf face the Denaby pack almost alone. He was the “strongman in adversity,” and he gave a most interesting performance, bringing up many a wonderful save with the agility and anticipation which brought him fame. But the odds were hopeless. Denaby were attacking not only with energy but with method and accuracy scarcely any opportunity was wasted, and against any but a first-class goalkeeper a long score would have been notched.

The second goal came seven minutes after the first, from Brayshaw, Gough been hindered rather than helped by his backs, for under the severe pressure they were continually falling back into goal. The third goal came from Cooper, a beautiful header, and the forthe, the best of the match from Brayshaw, who completed his hat-trick with. He burst through and gave Gough as hot a shot as he has ever stopped in his career. It was far too hot to hold, and it simply flew back the feet of Brayshaw, who at once blinded the luckless custodian. The last goal, another lob from Cooper, came within a couple of minutes of the end.

All interest in the contents, as a contest, had long died away, but the crowd were roused to great enthusiasm by the storm tactics of their favourites, and were delighted with their success. The Denaby defence had little to do but Ashmore and Windle were very good in attack. The “stars” of the game were Brayshaw, Pearson and Cooper with occasional good work from Fawden in the first and Kilner in the second. On the Castleford side Gough was alone in his glory 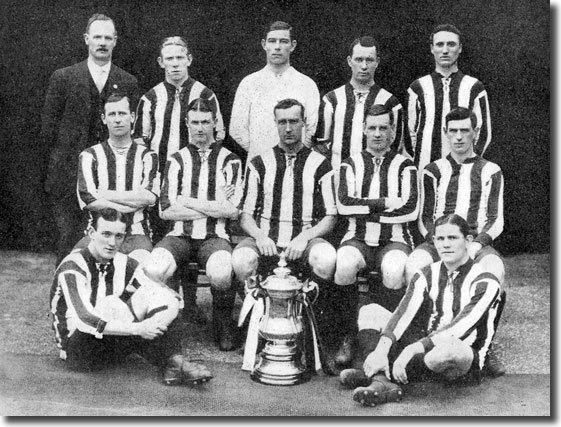