After a first half in which there was no territorial supremacy, United’s wide margin of victory was eloquent tribute to their strength this season.
This
Saturday’s match

The Ransome’s match never reached great heights of interest. Denaby struck twice in a tame first half, after 19 minutes (SAXTON) and after 40 minutes (LAW). Saxton had a hand in this second goal in that it followed a free kick which he kept low to the corner of the Ransome’s net, Law flicking it in very neatly. Crouch had essayed long shots which Mayhall fielded safely enough, and Robinson, on the left wing, one of Ransome’s liveliest forwards, obviously of the opinion that half a loaf was better than none, occasionally shot on the run. Like Woods he has a rocket shot, and once Mayhall pulled the ball very smartly out of the air, eluding the watchful Thomas. Robinson and Thomas were the chief source of danger to a Denaby defence whose work was always more impressive than that of their counterparts.

Frith, Ransome’s left wing, was out of luck. He got no change at all from Eddie Lockwood. SAXTON set the stage for the rather more exciting second half by scoring In the first minute. Boardman made the first move by nutting through a lovely ball to Saxton.  Spedding found touch to enable the Ransome’s forced defence to position, but when-the ball was sent out to Woods, the winger crossed it back for Saxton to swivel it in, smartly and surely. Saxton completed a trio in the 67th with a penalty for “hands” and TAYLOR got the fifth goal after 72 minutes United were unlucky that they did not even further boost their goal average.

United’s centre -forward and Midland league leading goalscorer, has now 38 goals to his credit, including the two he scored in the abandoned match with Doncaster Rovers’ Reserves.

Interesting point for the statisticians: only the league leaders, Notts Forest Reserves, have so far lost fewer games than United.

Grantham were a far livelier proposition than their 31 points from 33 Midland League matches would indicate and the balance hung steady in a first half in which United led 2-1 after falling behind in the 14th minute. Grantham’s goal came curiously enough from right-half CLAY. Mayhall came out to a long lob which beat him to the bounce and went over his head into the net, Hellings following it in. Within two minutes OSBORNE, supporting a forward burst, volleyed the ball and had beaten Eagien in the Grantham -goal—a grand tonic which ROWNEY improved by scoring from a crowdof legs after 24 minutes. Denaby put on top weight in the second half, LAW, BOARDMAN and STOCKS punctuating an exciting tussle with goals minutes.in the 69th, 72nd and 89th minute.

After his hat-trick on Saturday, Saxton was out of luck, but he Occupy the full attention of Grantham centre Craven. Lee played a masterly game and was constantly conspicuous against a lively forward line which always look good for goals. Marlow was unlucky when he hit the Denaby post, Saxton levelled up the luck when he headed a lovely ball against the Grantham crossbar. He crowned his work by scoring a grand goal in the last minute. 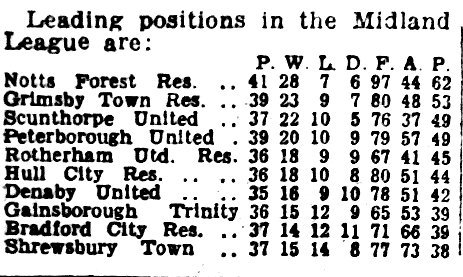