a programme full of incident thrill and punch marked the opening of the boxing season at the Drill Hall, Denaby Main, on Saturday. If all boxing promotion showed such a dividend of excitement and hard-hitting as this, there will be no talk of British boxing been in the doldrums. It was my first initial South Yorkshire boxing and I was agreeably surprised. It reflected the characteristics of the district with its vigour and doggedness.

The top liners were Frank Rounds (Mexborough) and Cal Botwood (Conanby) matched in a 10 round contest which finished in a blaze of glory in the third. The “winner takes all” terms of this bout lent an added keenness to it.

It opened on a cautious note, but although Rounds superior height and reach gave him an advantage, he scarcely made use of it. Botwood got under his guard and rapped several stiff rights to the head. Although the first round, which was slightly in Botwood favour was comparatively uneventful, it gave a promise of thrills to come. The promise was fulfilled with a vengeance!

Rounds leapt like a tiger from, the gong for the second, and Botwood was scarcely off his stool when he received a right to the jaw. Botwood hugged his head with his gloves and got away from the danger temporarily. Rounds, apparently intent on finishing the fight in a hurry, worried his man into a clinch, broke away, and clicked in a right that sent Botwood down for a count of seven.

Back on his feet Botwood closed with his man. A fierce fuselage of punches and Rounds took a hook to the jaw that sent him down like a log. Here was real excitement. In the deafening uproar the referee, yelling at the top of his voice could hardly be heard.

At 8 it looked all over bar shouting, and there are certainly been a quota of that. Then the unexpected happen, Rounds got to his feet, released it punch like a steel spring uncoiling, and this time Botwood went to the canvas for a count of eight. He recovered miraculously and in the pantomime that ensued apparently neither boxer undergone, for they were fighting furiously several seconds after it went.

Botwood nettles by his opponents surprise dash of the previous round, carried the fight to him in the third round. They fell into a clinch and slammed away at the body. Then round brought to the ropes. Botwood rapped home a right to the jaw that sent his opponent sprawling against the ropes, and followed this up to with a left to the head, which caught Rounds off his balance and sent him tumbling clean out of the ring among the spectators.

Rounds came back, obviously in pain, and after a clinch, put Botwood down for a short count. Then came the announcement before the next round that Rounds, in falling from the ring had hurt his shoulder and was unable to continue. 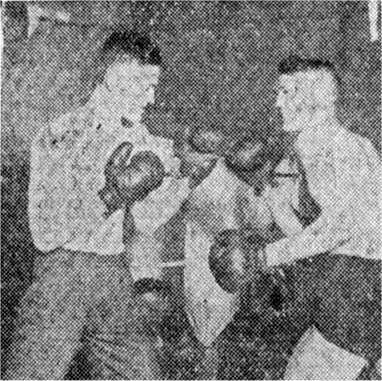 The other 10 rounder ended summarily with a knockout victory for young Taylor (Denaby) against Paddy Dainty (Denaby) in the fourth round.

Oldfield wins at Denaby – Billy Yates in the ring again

Boxing Revival at Denaby – Oldfield and Spooner Give Grand Show