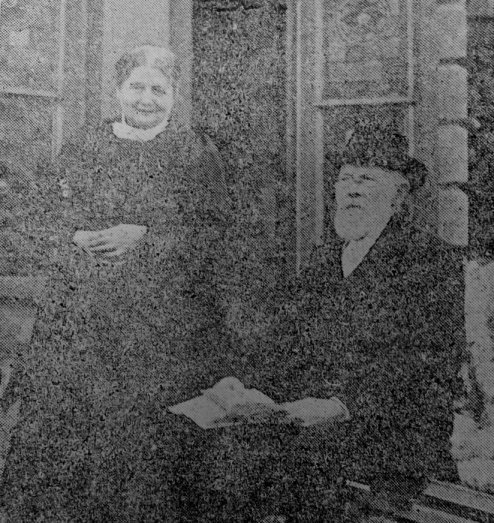 Few people who have seen fifty years of wedded life look as halo and hearty as do Mr. and Mrs. George Appleyard, of Croft House, Conisboro’.

On Monday of this week they celebrated their golden wedding. Than Mr. and Mrs. A pplevard, no couple are better known in the neighbourhood and certainly none are more highly respected. They are both Conisbroites, being descendants of very old Conisboro’ families.

Mr, Appleyard told us that he was born in the same house as his father. The name of Appleyard is one that is held in the highest esteem in local Wesleyan circles, and Mr. Appleyard may be said to have a life-long connection with that great religious movement . He joined the church in 1860, the year after his marriage, and he has been a Sunday school worker since. About thirty years ago (this is his own computation) he was appointed Superintendent of the school, and that position he has held since, being re-elected to it as late as Monday night. Of his work in the Sunday School, local Wesleyans know full well. He was a successful superintendent- right from the start, and the classes made wonderful progress under his guidance.

Mrs. Appleyard, too, has been a church worker, and for thirty years the success of the annual soirees was mainly due to her efforts. Now she is content to leave the work to younger people.

Mr. Appleyard, of course, takes as much interest as ever in his Sunday School work, and he gets about a good deal. He follows current happenings with as much interest as the youngest of us, and when aviation week, was on at Doncaster. he was there three or four times. Mrs. Appleyard went once.

A “Times” reporter had the privilege of a chat with Mr. and Mrs. Appleyard in their cosy front room at Croft House one day during the week.

Mr. Appleyard told me,” says the reporter, “that his marriage took place at the Conisboro’ Parish Church in 1859. He mentioned that he was a Sunday School Superintendent.

“You should be able to give an opinion on Sunday School work?” queried the reporter. “There can be only, one opinion oh that, score,” was the reply. “Anyone of experience will tell you that Sunday school work is the feeding ground for all churches. But, mind you, it was plodding, and not ability, that kept me in the position of Superintendent. You see I like the work. My heart is in it.”

“You have seen some changes locally, Mr Appleyard?”

“I have. Why, Mexboro’, that we consider so near us now, was a long way off when I was a boy. At that time there wasn’t a brick between Mr. Chambers’ house and the Denaby Crossing. Nor was there a brick house in Conisboro’ then. They were all whitewashed and of stone. Of course, I saw the beginning of the local collieries, too.”

“And we saw the railway opening,’ put in Mrs. Appleyard.

“Yes,” continued the old gentleman, “I remember the time when racehorses were brought from Swinton to Doncaster in bands, and when the messages had to be taken from the cause to Swinton station. But we were not married then, you know.”

“How long have you been retired Mr Appleyard”?

“I think I’d better show you a pair of my retired shoes.” was the reply, and Mr. Appleyard, smiling. produced a pair of yard boots, which had evidently been worn the same day.

The reporter began to wish he hadn’t asked the question. but Mrs. Appleyard smoothed matters over by explaining that her husband had had the boots on that morning to feed his fowls.

“Well, I retired from business three years ago, when I wave the place over to the boys.”

“And you retain all your faculties, of course? I can see you do. ”

“I don’t think there is anything I can’t do, was the smiling reply, “except that I can’t lift so heavy weights. But I am as straight to-clay as ever I was.”

“That’s a fine thing for a person of your age to be able to say,” remarked the reporter, “But what do attribute all this to?”

“Well, I have lived generously, and I have had a cold dip every morning.”

“Every morning?” queried the newspaperman

“Yes, every mornng. I have had one this morning ”’ I believe in cold water. Of course it’s used to me now.”

And what do you think of Conisbrough now and 50 years ago?

“Ah, that is a big question. Of course I knew it in its primitive days, when it was purely agricultural. There was only the sickle works and the old brickyard then.

“But although the place has developed at a marvellous rate,” observed Mrs. Appleyard, “we have never got a public hall for Conisboro’. That is one of the things that has been neglected, and it would do a deal of good.

“By the way,” said ,Mr. Appleyard, “there is my handwriting last Saturday”, showing me a document. “A good ‘many young ones could not do it a bit better.”

“A good many young ones would like to be able to do it half as well,” said I. The writing was in small, neat, exactly-formed characters.

Before leaving, Mr. and Mrs. Appleyard showed me a pair of gold mounted umbrellas, with inscriptions in gold setting, which their children had presented to them in celebration of their golden wedding.

“Of course we kept the affair quiet,” said Mrs. Appleyard; “but the lads would do something. None of them knew at the church.”

Mr. and Mrs. Appleyard have eight children living – four sons and four daughters – out of a family of 12 and they all live in the neighbourhood, most of them in the village. They are 15 grandchildren.

The photograph, which we publish, was taken less than a year ago.