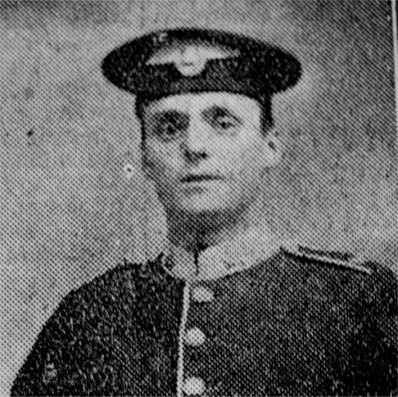 Private Richard Finney, of Conisbrough, the story of whose narrow escape from death was narrated in the Mexborough and Swinton times several weeks ago, has now returned to his home from the Alexandra military hospital at Cosham, and it has been possible to glean further details of his adventures.

It will be recalled that he was ordered up on August 5, and towards the end of the month was on French soil, and acting as reserve during the retreat from Mons to the Aisne Valley. At Armentieries a report came to headquarters that 100 Germans were stranded in a wood. The sixth division were sent out to effect their capture, but five German Army Corps were quickly brought up, and the division was practically surrounded, having to fight and cut its way back into Armentieries. The section in which Finney was were ordered to return and take up an important position between the small village and Armentieries, which was done, and here they remained for three weeks, the Germans been unable to dislodge them. Finney and one or two more snipers were using the cover of a farmhouse, and were fortifying it. Here he saw Cpl gamble of Conisbrough, shot through the eye.

“I was just leaving the gable end of the farm where we were sniping,” said Finney, “and only about 6 inches of my body was exposed. I felt something hit me just as though someone had given me a blow same as a “Jack Johnson or a Ray Fitzsimons solar plexus blow.” I said to another man, “I have got it” He asked me, “where?” I said. “I been nicked in the heart.”

I was told to lie down, and a stretcher was made with a bag and some sticks, on which I was carried to the hospital when it was dark. There the doctor asked me what I was before joining the Army, and I told him I was a brick burner and gone in for physical culture for boxing, being trained by Mr Moody of the Alma Inn, Conisbrough. He told me it was a jolly good job I was so fit, else I should never have pulled through.”

Finney reached his 31st year the day before he was wounded. He has many other escapes from death, for when returning from India the transport ship had a large part of it torn away during the passage across the Bay of Biscay.

In Denaby MainPit he was once buried by a fall. On another occasion he had his thigh broken and again while in the pit, he had his knees smashed.