Conisbrough Urban Council chalked up a number of personal and district “firsts” yesterday when the chairman of the housing committee, county coun. J. Pendergast, opened block one of the Wellgate redevelopment scheme.

The £300,000 project is financially and physically the biggest single contract ever led by the council, their only existing redevelopment site; and the first “open plan” housing scheme in the district. No boundary walls or fences surround the up-to-the-minute dwelling described by the council clear, Mr Eric Mellor, as the first major in road into the provision of housing for families displaced by the Council’s colossal clearance scheme. 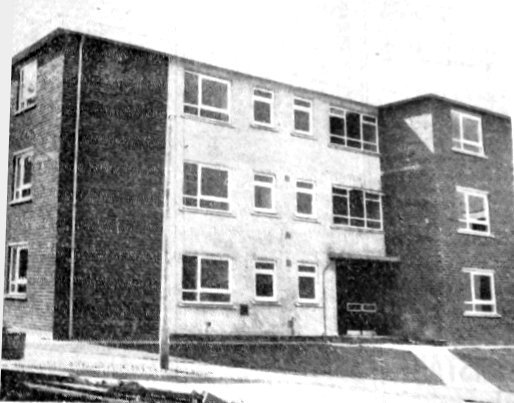 The main contractors, Messrs. Frank Haslam, Milan, are galloping along that the rate of a block every three weeks, and when the 15 blocks are complete by early 1968, 405 people will be housed there.

Every possible effort has been made to ensure the comfort and contentment of the new Wellgate dwellers. Each block is made up of three single bedroom ground floor old people’s flats, topped by three or four bedroomed family accommodation.

A showhouse has been specially opened by the council for your inspection and stays open in the evenings. Messrs W. Flavell and sons (Wath) Ltd. have undertaken the furnishing of the flat and mainsonette, and have used the top quality goods which have made them first choice for homemakers in the district. The Church Street, Conisbrough, and Montgomery Road, Wath, business took on the contract with only a week to go till opening day, but the result is immaculate. The Conisbrough store manager, Mr W. Flavell, says he is proud of the “incomparable quality” of the furniture his firm stocks.

Flavell’s refuse to enter the cut-price entry and free offer race of much of today’s furniture trade, but assure perspective customers of a genuine price and the best goods, with a free trip to the Wath shop for Conisbrough couples who want to study the selection. All the fitted carpeting, washers, fridges, light fittings and furniture are Flavells stock.

Roads, garage plots and clothes drying areas all featured in the Wellgate system, and there are to be lawns and grass plots attended with all the care and experience for which Conisbrough’s Parks Department are celebrated.

Every housewife will have a rotary clothes dryer, which can be dismantled and stored indoors ready for washday.

Special provision has been made for the pensioners who will tenant 45 of the dwellings. Two woman wardens will look after their needs, and will be linked to them by a special intercom system. Old people in these plots will happily not be separated from younger members of the community, and if any sort of difficulties should arise for them, help will be readily available from other Wellgate inhabitants.

A Conisbrough Urban Council team planned the whole redevelopment, and the engineer and surveyor, Mr R. M. Clark, told me this week about the difficulties they faced in getting the scheme off the ground. He said, “the 5 ½ acre site presented fairly weighty problems because it was already developed. Part of it was farmland, and the rest occupied by very old properties.

“But perhaps the biggest problem we faced was the slope of the land. There was a considerable variation in level from one end of the piece to the other, which we overcame by building in the stepped open plan lock system.”

The Council help the Wellgate flats and maisonettes situated right in the middle of Conisbrough, will help to ensure the success of the shopping development being undertaken in the town centre, if housewives who come here patronise new shops being built under the council’s master plan.

Heating in the flats is by high-speed gas. Balanced flue space heaters, warm air units and circulators must ensure super warm and piping hot water even in the depths of winter.

All the plastering for the homes is being done by the Bentley Road, Doncaster, of Trimming and Law. The firm will undertake any contract from houses to hospitals, and even now, in fact, are working on a big project at Doncaster Royal infirmary. In addition to the internal plastering, they worked on this external panels which decorate the buildings.

Conisbrough Urban Council paint the walls of each old person’s flat, and all the decorating of window frames, walls and ceilings you will see in the showhouse is a work of Messrs E. Flechwell and Co, Ltd. Of 27, central boulevard. Wheatley Hills, Doncaster.

Floors throughout have been tiled by Messrs. Bennett, and Rothwell, flooring Ltd.. 39 Rose Crescent, Doncaster.

Architects will be happy to learn of the thought and consideration given by the Engineers department to the planning of the project. The council were determined that the well gate scheme should be pleasing to the eye and one perfectly with existing buildings. They have even gone to the extent of using special “ Bronte Stone” breaks in building the block which fronts Castle Street, so that they will tone with the Vicarage and adjacent buildings.

The Council and the Ministry of Housing and local government were determined, too, that the ancient well which gave Wellgate its name should be preserved.

The well, of uncertain but considerable age, is now something of a centrepiece in the midst of ultramodern well gate.

The G. P. O. Have cooperated with the council to make special provision for the easy installation of telephones for anyone who wants one.

A communal television aerial system is provided, and this should make for improved reception and a pleasant skyline. The West Riding County Council have acquired a corner of the site where they plan to build a brand-new library. This should be available to Conisbrough people before too long.

Progress on the redevelopment is exceeding most expectations. We spoke about this to Mr Mellor and he explained “There was no chance of a breakdown in communications or misunderstandings between planners and builders because our architectural assistant, Mr D. Taylor, who made the necessary jargons, work both on his drawing board and on the site itself.

“This system worked perfectly, and has pleased both the Council and the builders. The engineers department have done a fine job.”

Present at the official opening yesterday, with counsel and contractors representatives and one of the well gate pioneers, former engineer and surveyor, Mr C. H. Urch. Conisbrough is pressing ahead with more re housing scheme so that the Doncaster Road area at Denaby can be finally cleared.

Old as a Centrepiece for the New – Wellgate (pictures)