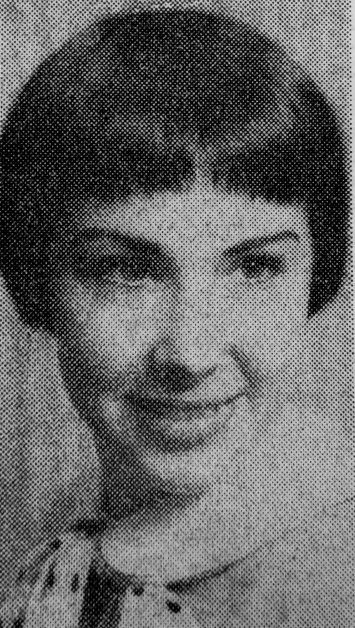 A Former Conisbrough Woman has received an enthusiastic response from the American Press for her first dramatic role since her schooldays.

Mrs. Muriel Kolb, formerly Muriel Rhodes, left England 11 years ago to work in America and has taken on a leading role in a Texan production of Agatha Christie’s “The Mousetrap”.

Says one publication: “She turns her back on British reserve and manages a warm, forthright performance with open faced directness;” and continues, “The part is played with a finesse that is usually reserved for experience.”

Mrs. Kolb is the daughter of Mr, and Mrs. Benjamin Rhodes, of 4, Cedric Avenue, Conisbrough.

“She has always been interested in singing and used to entertain in Denaby and Conisbrough,” said her mother, Mrs, Doris Rhodes. “I think she is going to stay with the theatre. I hope she goes professional because she was always interested in anything like that, and if she could, it would be nice.”

Muriel, (33), left her job at Denaby Powder Works to work as a maid for Mr. J. T. Beaudouin, Managing Editor of the Readers Digest Book Club at Chappaqua near New York City.

After 12 months she moved to Texas to work for an oil millionaire. There she met her husband, Mr. Larry Kolb, who is in the insurance business. That was 10 years, ago and now Muriel is settled in Longview, Texas, with her husband and an eight years-old daughter.