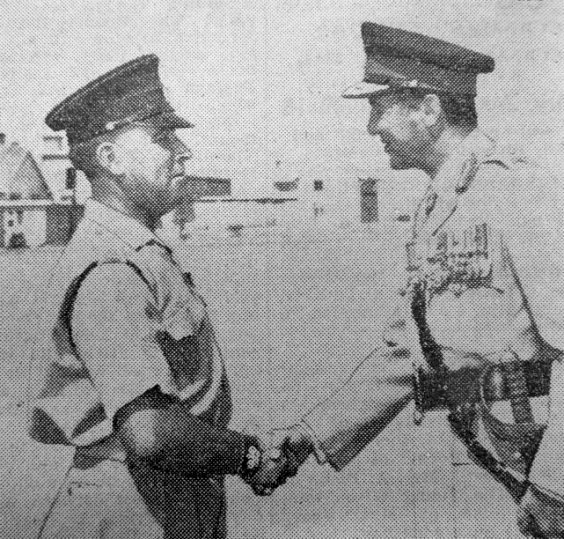 Mrs Ivy Gillott of 39 Warmsworth St, Denaby is justly proud of the picture she has loaned to us this week of her son, Sergeant Major Ted Gillett, receiving an award in Cyprus, She was visited by two Officers last week-end who brought the picture and the citation.

The parade was held to mark the official farewell from Headquarters, Royal Engineers, Cyprus, of the 33rd Field Squadron, who have now returned home to England.

Sgt.-Major Gillott is a married man with four children and in November this year celebrates 20 years’ service in the Army.

General Officer Commanding Cyprus District, Major General D. L. Lloyd Owen said of the award for Long Service and Good Conduct, “It is not given lightly.”

General Lloyd Owen further remarked, “Never in all my career in the Army have I seen or heard of anyone presenting as many Long Service and Good Conduct Medals at one time as I have to-day. It has been really remarkable. I have presented a great many Long Service and Good Conduct Medals in my time and on each occasion I feel that it is a real privilege to be able to do so.”

Sgt.-Major Ted Gillott is known to many in Denaby Main and district. When on leave they make their home with his mother, Mrs. Gillott.

At present he is stationed at Borden in Hampshire.