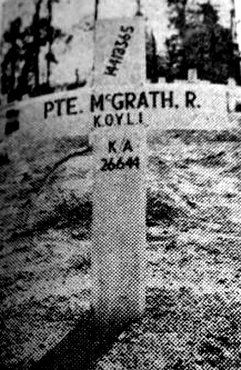 Unable to speak French, a Conisbrough mother who went out last week to Normandy to find the grave of her 17 ½ year old son, killed in the early days of the invasion, used a photograph of the grave to overcome the language difficulties. Eventually she was taken by French peasants to a young Frenchman able to speak English, the young patriarch, in the spirit of the Entente Cordiale gladdened the heart of this South Yorkshire mother by offering to “adopt” the grave and tender it in appreciation of the British deliverance of his country. The offer was gratefully accepted.

The mother is Mrs Winnifred McGrath, 45 Daylands Ave whose husband, ex-company Sergeant Major William McGrath, served for 25 years in the K.O.Y.L.I. Their son, Pte. Ronald McGrath, was following in his father’s footsteps as a regular soldier in the same regiment. He had only been in the army 21 months when he was killed in June, 1944.

Here is a reproduction of the photograph of her soldier sons grave which Mrs Winnifred McGrath, Daylands Avenue, Conisbrough, showed French peasants to help her to find the grave last week at the British Cemetery at Fentenay, near Caen. Mrs Metcalfe is unable to speak French.

The kind Frenchman is M. Paul Legrand, of Fontenay-le-Pesnel, near Tilly-sur-Seulles, Calvados. Mrs McGrath, who spent a week in France, returned to Conisbrough on Saturday. She told a South Yorkshire Times reporter on Tuesday that she wanted other mothers. Fathers, brothers, sisters, sweethearts and friends who have loved one buried in Normandy and were unable to afford a visit to know how beautifully the graves were kept.

“Ronald is buried in the British Cemetery at Fontenay, near Caen” she said “there are two cemeteries there, and there is not as much as a single weed anywhere. Each grave has a white cross. Bearing the men’s name and number, and a little rose tree. The trees are in bloom now, with dark red roses. The troops are looking after their graves at the moment, but in a few weeks time the Imperial War Graves Commission are taking over and eventually the white crosses will be replaced by headstones.”

It was Mrs McGrath first visit to France. She made the journey alone. The French she found considerate and helpful. She explained her language difficulties to Monsieur Legrand and he replied that if there were any other people in South Yorkshire who had relatives buried in the two cemeteries he would adopt the graves of their soldier sons and friends as well if people would communicate with him. 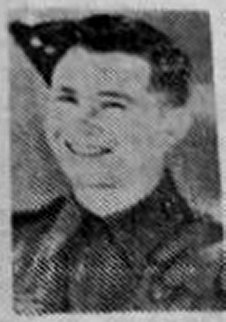 Despite the fact that the government only allows tourists to take £5 out of the country in currency, Mrs McGrath was determined to make the journey. Ronald would have been 21 on Monday of last week,” she said “and I choose last week especially so that I could be beside his grave on the day he would have celebrated his coming of age.” She left Britain for Normandy on the Sunday.

Private McGrath comes of a military family. For 4 ½ years his father and mother resided at Denaby Main Drill Hall, and his father would have retired after completing 21 years service but for the war; instead he continued on active service a further four years, and was finally demobilised two years ago. Another brother, Corporal Harry McGrath, R. A. S. C., third regular soldier in the family, expects to leave the army in three weeks time on completion of seven years service. Pte. McGrath died within a few days of beginning his first overseas experience.