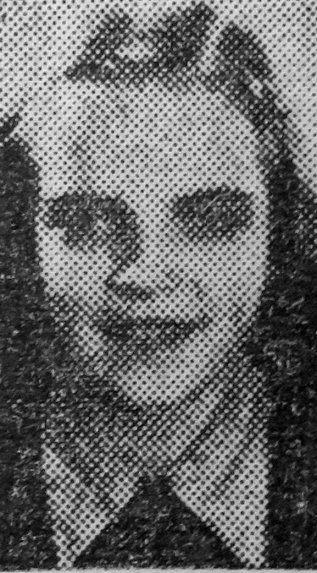 A 13-years-old German girl, Eva Kaun, eldest daughter of Kerr Max Kaun, a German teacher, of Rendsburg, Schleswig-Holstein, in the British Zone of Germany, arrived in Swinton on Saturday to stay with Mrs. R. Cobb, of 7, Highfield Road, Swinton.

Her passport is endorsed for one year’s stay in England, but her father has not yet decided whether to let her stay so long away from her family. She has two brothers and two sisters, all of whom are younger.

Eva’s uncle, who was a prisoner of war at Ravenfleld Hall, stayed several times during his sojourn in England as the guest of Mr. and Mrs. Cobb in Swinton, and after his return home invited them to Germany.

They have been unable to visit Germany as yet, but have continued writing, and the correspondence extended to include Herr Max Kaun. Mrs. Cobb and Eva’s father have been writing for about a year, and Mrs. Cobb recently suggested that Eva be allowed to come to England.

Herr Kaun jumped at the chance. Mrs. Cobb says that his English is probably more grammatically correct that many Englishmen’s, and Eva speaks English fairly well, having been taught at Rendsburg Grammar School, Mrs. Cobb hopes that she will be allowed to attend Mexborough Grammar School during her stay here, and the school authorities have already been approached about the matter.

When a ” South Yorkshire Times” reporter called on Tuesday, Eva had broken off writing home to do some shopping for Mrs. Cobb. “She has been dying to spend some English money ever since she arrived,” Mrs.Cobb said.

She is a native of East Prussia, and had to take refuge from the Russians in January, 1945. They went by farm wagons from then home to Danzig, and from Danzig in cattle trucks across Germany finally settling in the British Zone. Life in the British Zone is more comfortable than in either the American or Russian Zones according to Eva.

She is looking forward to meeting Gustav Lautenbach, a German boy who attends Mexborough Grammar School and who is staying with Mr and Mrs. V. J. Peck, of Drakehead Lane, Conisbrough.