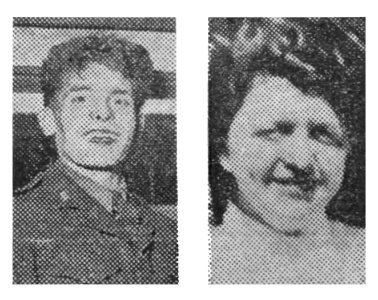 When 20-years-old Denaby soldier Peter Harrison, who joined the Army “to see the world,” heard he was posted to Iserholn, Germany, with his regiment the Green Howards, he was particularly pleased.

For Peter, eldest son of Mr. and Mrs. W. Harrison, Blyth Street, Denaby, knew that he would be only 150 miles from his sister, Margaret (24), who is serving at Hostert, in Germany, with the Queen Alexandra Nursing Corps.

“Peter joined the Army because he wanted to see the world. He arrived back after 18 months in Hong Kong and was very pleased when he heard he was being posted to Germany. The first thing he said was “I shall be able to go and visit Margaret’.”

Signs Off In March

Peter, a former pupil at Conisbrough Northcliffe School, worked at Denaby Main Colliery before joining the Army two-and-a-half years ago. He signed for three years and is due to be demobilised in March.

He is pictured above during the journey to his second posting abroad.

Margaret who has been in Germany for about two years, worked in the mills before joining the Nursing Corps. She will continue her career when she is demobilised in January.