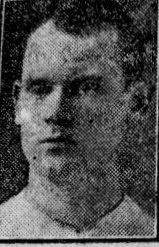 Joseph (“Joby”), Godfrey came to Denaby United at the tail of last season, from Rotherham Town, and is one of the most seasoned men in local Midland league football.

He has been a great scoring force in the last six or seven seasons, and there are lots of goals to come from him yet. He first came into prominence with Notts Forest in 1916, and scored 23 goals in that season from the centre forward position, following with 24 in the next season. Then he went to Birmingham and scored 24 in his first season there.

From Birmingham in 1920 he was transferred at his own request to Coventry City, but he only stayed there six weeks and finished the season with Manchester City.

His next club was Merthyr in the Southern league, and he scored 15 goals for them.

He came to Rotherham Town at the beginning of 1921 – 1922, and when the Clifton Lane club were obliged to part with players owing to financial strain, he embraced the opportunity to move on to Denaby, for whom he played in a few matches last spring, and opened this season as a regular member of the side, though for the last fortnight he has stood down, the recent brilliance of Stanley Pearson tempting the management to experiment.

Godfrey is a brainy player, with any amount of dash and judgement and puts his whole heart into his work. So far this season he has scored eight goals, including a hat-trick, and some of them were very pretty goals indeed.

He is bound to come to the front again, and Denaby United are fortunate to be able to rest a player of his class.