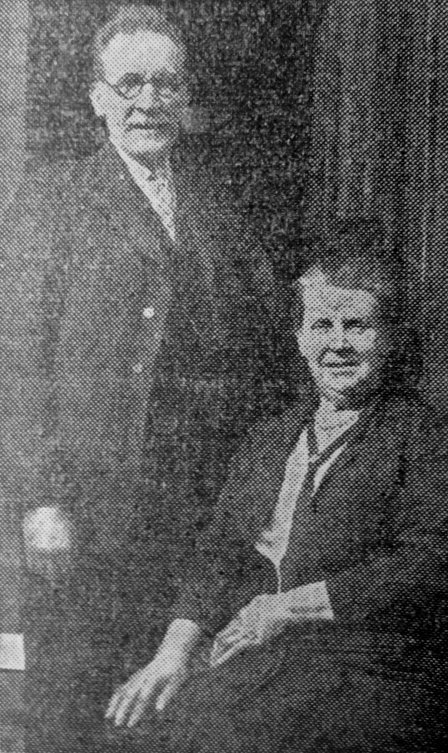 70 guests who have been invited to the Conisborough Welfare Pavilion tomorrow to celebrate the 15th anniversary of the marriage of Mr. and Mrs. Hall, of 39 Ivanhoe Road, Conisborough. Arrangements for the festivities of this Golden Wedding had been made by two friends, Mesdame Bradley and Robinson, of Ivanhoe Road.

When a “South Yorkshire Times” representative interviewed Mr and Mrs Hall on Wednesday, he was regaled with ale from a private brew of Mr Hall. Incidentally the brewer was proud of his achievement in that line. Had not this been a literal case of ‘Miners Dream of Home,’ our representative would have had to journey to Canada for this story. And this is why.

In 1920 Mr. and Mrs. Hall, along with one daughter, Evelyn, went to Nova Scotia, where Mr Hall had obtained employment with the Eastern Car Company. “I came back because I was homesick.” Said Mr Hall “during the days I thought of Conisborough, and during the nights I dreamed of home so after four months we returned to the countryside we loved.”

Miss Evelyn is now Mrs Martin, of Ackworth, near Pontefract.

Mr Hall and his wife Mrs Sarah Ann Hall, were married at St James Church, Woodhouse, near Sheffield. Mr Hall is a native of Newcastle-under-Lyne, Staffordshire, and was the son of an ironmaker. He commenced his career in the ironworks, but after three days he went to the mine at Ince in Makerfield Wigan. There he worked 11 days in each fortnight for a shilling a day.

In 1881 Mr Hall came to Yorkshire and for 18 months was employed at ironworks which then existed at Woodhouse. From there he went to Fence colliery, then back to Lancashire but some retired to Woodhouse and settled at Beighton. From thence a move was made to Rawmarsh, where Mr Hall worked at Roundwood colliery and for six years he was president of the Yorkshire Mineworkers Association.