Couple Met in the Choir 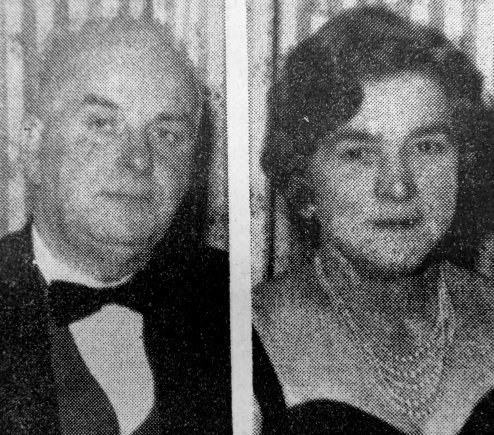 Mr and Mrs Friend Waring, of “Meadowcliffe,” 7, Stuart Close Hathersett, Norwich, who met when they were both members of Denaby Main Parish Church choir, will be celebrating their Golden Wedding on April 14th.

Mr. Waring served in the R.A.S.C. during the first World War, and subsequently returned to his job as a Wages Clerk with Denaby and Cadeby Main Collieries Ltd. On Nationalisation of the coal industry he moved to Manvers and later to Elsecar as Chief Wages Clerk and Cashier of a Group of Collieries. Due to economic changes he became one of a number of redundant staff and he went to York to become Company Secretary for a firm of builders (Bradley’s of York).

He was an external pupil of a London College, whereby he berme a Chartered Accountant, and for many years he was Secretary of Denaby and Cadeby Cricket, Tennis and Bowls Club.

Mrs. Waring is an accomplished pianist and organist and has a fine contralto voice. She was trained by the late Arthur Butler, senior of Mexborough, and sang in Charity Concerts during the first World War, many of which were at the old Mexborough Hippodrome. She also took Part in Charity Concerts at Mexborough during the second World War. She has played the organ at churches in Mexborough, Doncaster, and York, and has done much solo work at churches.

On retirement, Mr. and Mrs. Waring went to live at Hethersett, near Norwich. They enjoy good health and, living very near to the Norfolk coast, and in pleasant countryside, they are having a happy and well-earned retirement.

They have six children, three sons and three daughters, and five grandchildren

Mr and Mrs Waring have always taken the “South Yorkshire Times”, and still have it forwarded each week to Hethersett. The family is arranging a celebration party and a holiday for their parents to commemorate the occasion.