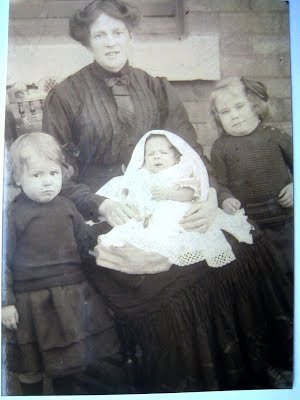 I have attached a photograph of William Green’s widow and their three children. Carrie aged about three and a half, is to the right, Florence is two and the baby is Wilhelmina “Win” and she was born in the August after the explosions.

Carrie won a county scholarship to Mexborough Grammar School, the first pupil to do so from the Denaby school and her name was the first one on the school honours board. The family was hard pressed to fund her
attendance, but relatives made contributions so that it was possible. She later became a teacher, married Colin Keys, raised four children and retired as a headteacher.

Florence became a nurse, a nursing sister
and midwife spending many years working in South Yorkshire
before and after her marriage to Thomas Ives. They raised two boys.

I have made the above brief summary so that you can include the approriate information to accompany the photograh should you include this within the information relating to William Green. There is much more information about the family’s early life in Denaby and I am
able to draw upon an extensive record written by my mother Florence.

When I read the material about Denaby, many memories were unlocked and missing pieces of information slotted into place. As a small boy I can recall hearing reference to the Drum and the pitch and toss activities, not really understanding what this meant. I was also pleased to read about the strike dates and finally realise that my grandfather did not come to Denaby as a strike breaker, for I had heard about the evictions, the destitution and in later years I had mistakenly merged these with the arrival of William to Denaby. It seems that he came to Denaby in early 1912 looking for work for the work in the iron foundry in Staffordshire had become scarce. His wife, Elizabeth and the two girls remained in Staffordshire. They joined him a few weeks before he was killed. I think that he either came with friends or relatives because Elizabeth
had the support of these from within the village, after his death. I notice that some of the published information refers to workers from Staffordshire
arriving in Denaby over an extended period.

I will also relate one family story that may be of interest for it ties in well with accounts of the explosion and injuries sustained by the victims.

Elizabeth along with many others congregated
at the pit when news of the explosion reached them. Its hard to imagine her desperation for she was eight months pregnant with their third child. However,
a worker shouted across to her ” we’ve got him Liz and he’s alive”. She spent time in hospital with the heavily bandaged burned miner yet felt within herself that this was not William. William had in fact been killed and his body was later identified from the repairs made to his workboots. The part time cobbler was able to identify the work he had completed just days earlier.

The family were subsequently suffering severe financial hardship. Liz got herself a job collection insurance premiums, by bicycling around the local area and as she did she would act as agent for clothing from a catalogue scheme. This was supplement and later replaced by bundles of used clothes sent from the wealthier areas of Manchester,
another sister lived there and acted as a source of supply. Rather like Africa today? She finally obtained a drapers shop on Doncaster Road, which she ran for many years until she retired. She died aged 81 at the home of Winnie, the baby shown in the photograph.

Your references to the pawnshop released memories too. I remember an old man, Edmund
Ackrill, who managed the pawn shop and he and his family were friends of my grandmother Elizabeth. One story I also remember, is that Elizabeth had William’s sister Carrie living in Denaby and she was married to a certain Joe Darby. Joe served in the first world war and for a particular act of bravery he was awarded the Military Medal. During the 1920’s and the subsequent hardships encountered, this medal was pawned and was never able to be redeemed. They had a son Alfred who is commemorated on the Denaby war memorial. He was lost at sea, torpedoed, a few days before I was born in 1944.

I hope that you find this information to be of interest and can find some way of including it within the other historical information presented so far. It is good that these small collections of first person experiences can be documented for future reference.

Just a little more information about the two girls Florence
and Carrie, that follows on from the years after 1912.

Florence can be seen seated to the left of Elizabeth as seen on the wedding photograph of “Winnie”., which is already displayed on the link to William Green. Here she is a young unmarried woman, Carrie is married by now, but I suspect that she is not included in the set photograph because she is heavily pregnant with her second child, and such was the style of doing things in those days. Her eldest son Alan Keys is the small page boy. As indicated in my earlier email, he served in the RAF before joining BAC leading sales teams and project development for the Jaguar, Tornado and Typhoon aircraft. I know that he was involved, through some of his other business links, in establishing the Earth Centre on the site of Cadeby Colliery. He was always proud of his mining heritage.

Carrie and Florence grew to be strong opinionated women ultimately typical family matriarchs. They both married miners and each family moved to Maltby , where both husbands worked. In 1938 Carrie and Florence persuaded a Dinnington based house builder to rent them two adjacent and newly built houses on the strength of their husbands both having jobs at Dinnington colliery. The husbands were then told to go and see the manager at Dinnington and ask for work. Their plan worked, no doubt aided by the fact that the managersÂ´ wife was CarrieÂ´s sister in law.

Florence stayed in Dinnington until she died in her 92 year. Carrie and family moved on to Worksop where she became a head teacher. She died in 1984 in a Bournmouth nursing home. 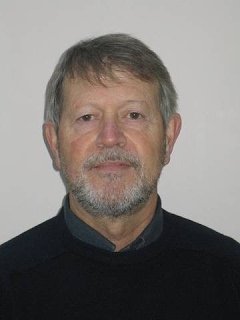 I am the youngest son of Florence, I grew up in Dinnington and stayed there until my late teens, then further education and work took me away.

I currently live near Newark, Nottinghamshire.

Brian Hobson, who supplied the information and the two other photographs, was married to WinnieÂ´s daughter. He hopes to be
able to attend the 100th anniversary parade, but has not been well recently and may not be able to make it.