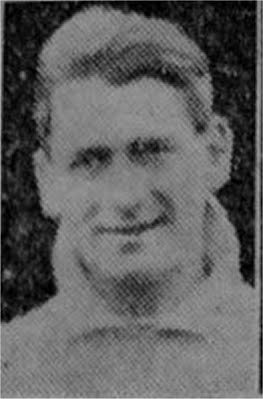 Harold Hamilton, the Denaby United outside right, was recently taken upon himself a wife, is a canny Scotsman from Parkgate.

He came to Denaby three seasons ago, but it took him and directors some time to find the best that was his game

He had the satisfaction of scoring the first goal for the reconstructed Denaby club, away from home. That was at Oakwell, three seasons ago, the only away match Denaby won that season.

Bob Chantry discovered Hamilton scoring heaps of goals for Parkgate Christ Church, and brought him along to Denaby.

Since then Hamilton has played many brilliant games, both at centre forward and at outside right, but he’s happiest on the wing, and has given Denaby his best service there. If he could keep consistency near his high water mark, he would be one of the finest wing forwards in England today. He has a fine turn of speed, and occasionally fires at long rangewith all the power and accuracy of “Dido” Blackburn.

He served throughout the war, and played a good deal of Army football. Before going to the front he played twice for Clydebank, and four times for Bradford city. After the Armistice he was included in the Rhine Army team that should the French, Belgian and American zones of occupation.

On demobilisation he received offers from several good clubs, and chose Birmingham, for whom he played on in the season 1919 – 20, but failed to find his true form.
He settled down Parkgate and it was there that Denaby found him. Denaby have no more interesting player, and he has been consistently a favourite with the crowd, even when it has been of form.

He is an obvious trier, a sportsman, and a gentleman of the team that originally turned out for the new Denaby club three seasons ago, he is the only survivor, if we except Tim Peters. He is 25 years of age, 11 stone and 5 foot 6 1/2 inches.