He was in the D Day Landings

In the company of their three sons, three daughters, 21 grandchildren and 10 great grandchildren Mr and Mrs George Henry Harrison of Northcliffe Road Conisbrough celebrated their golden wedding on Saturday.
Mr Harrison (72), a former Baker and Bessemer worker, and his wife Mrs Evelyn Harrison (68) were married in Conisbrough and have lived there all of their married lives.

Mrs Harrison was born at Old Hill. Her husband originates from Buckinghamshire.

Mr Harrison who retired at 67 served with the K.O.Y.L.I. in France and Germany during the first Word War, with the Pioneer Corps during the last war and was present at the Normandy ‘D’ Day landings. 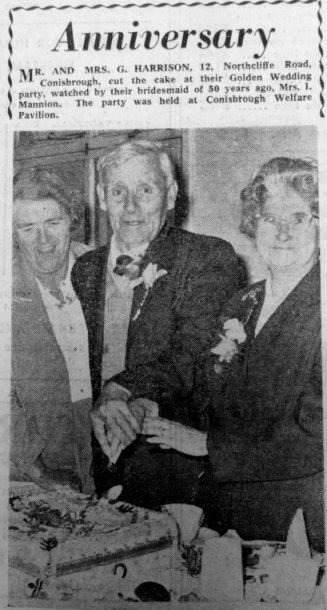