A High Standard Set by Young Boxers at Denaby. 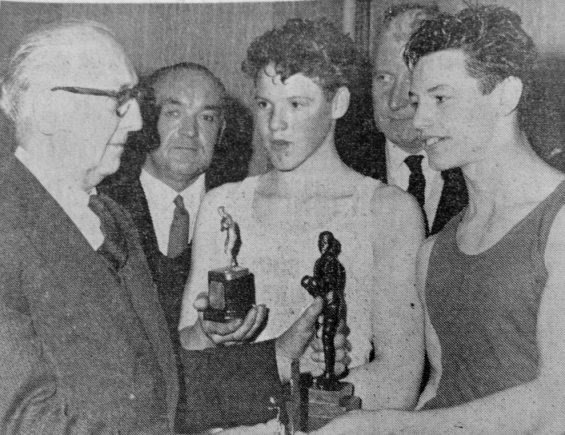 
A generous applause from a surprisingly large audience rewarded young boxing hopefuls from all the West Riding, who took part in an entertaining bill at Denaby Main Miners Welfare on Friday.

Conisbrough Ellershaw, A.B.C. coach, Mr Norman Arrowsuch, organiser of the evening’s boxing, told the “South Yorkshire Times.” How pleased he was with the public response to this, the second bill he and his club have staged. The first, last year, was poorly attended. Certainly the lads themselves must have been encouraged by the warm applause they received.

But those who sat through the two hours long bill were themselves rewarded by the high standard set by the younger contestants who were drawn from the White Rose, A.B.C., Wakefield, Elmfield house, Doncaster, the Doncaster Plant Works A.B.C., the Bradford Police Boys Club boxing section, the Barnsley A.B.C. and the Conisbrough Windmill Youth club as well as from the Ellershaw club.

In addition to the vigourous and highly entertaining stuff served up on the bill as a whole, the evening included a battle of tactics rather than punches in an exhibition bout between Robert Pearson (Ellershaw) and Tommy Joyce (Plant works), two lads were well on the way to making prospective rivals sit up and take notice.

Before their bout they were both subject of presentations.

Joyce, aged 16, of Chestnut Grove, Conisbrough, is a 1964 Northern Counties Boys Clubs Champion, and a present North Eastern Junior A.B.A. titleholder. On Friday he received the J Osmond Wall trophy as the West riding’s most promising young boxer of the year.

Making the presentation was a man who lends his name to the award Mr J Osmond Wall, of Rustlings road Sheffield.

Mr Wall is a past president of the Yorkshire Referees and Judges Association and a member of the West Riding Divisional Executive of the A.B.A..

The award to Pearson, a talented 15-year-old of Old Road, Conisbrough, was made by Denaby NUM delegate, Mr Tom Wright

Robert, who is in only his second season of boxing as compared to Tommy’s eight years experience, received the Harold High Trophy as the yearÂ´s best boxer at the Ellershaw. He is also a North Eastern Jr A.B.A.Champion and in 1963 became a Yorkshire SchoolboyÂ´ Champion. 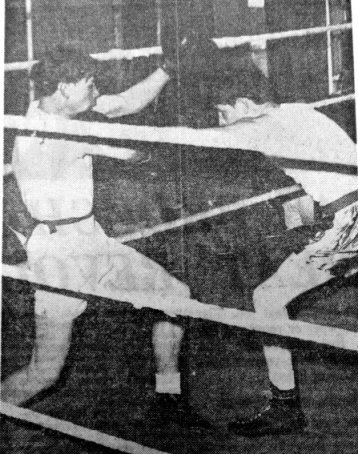 Ian Bond (right) scores with a straight left to the jaw of Denis Booker. Bond went on to win the fight in the Ellershaw’s Boxing Club’s tournament at Denaby Welfare