Junior Champion at Her First Attempt 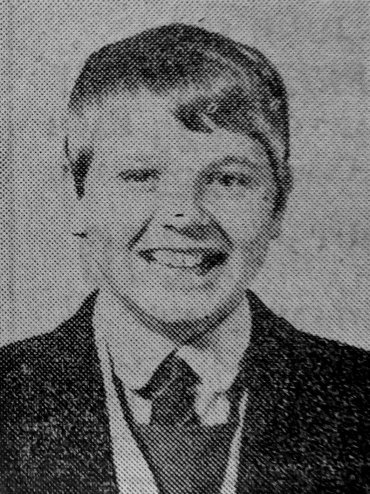 AT the age of 14, Conisbrough girl Anne Goodlad can be said to be a child prodigy. On May 31st, in only her third competition since she began serious training seven months ago, she became Yorkshire Junior Champion in the javelin event at the Yorkshire Women’s A.A.A. Championship Meeting at Middlesbrough, with a fantastic throw of 108 ft. 8 ins., smashing the previous championship best set up in 1965 by a clear 10 ft. 71 ins.

With the Olympic Games as her ultimate’ target, Anne is now under the expert guidance of Wilf Paish, Northern A.A.A. professional coach, who predicts for her a bright future in athletics.

Anne became interested in the sport at school — Conisbrough Northcliffe High School—and first revealed her throwing talents the very first time she used the javelin. After tuition on how to hold the missile, she launched it 70 ft. 2 ins. and broke the school record: She was 13 years old at the time.

Anne was then introduced to Sheffield United Harriers coach, Harold Fowler, and he recommended that she come under the wing of Mr. Paish, the man responsible for harnessing the talents of the area’s top athletes. Intensive training began in November—”she couldn’t move for a fortnight after the first stint,” said. Anne’s father, Mr, Harold Goodland—and her opening competition was an inter-club event at Sheffield in May.

Predicitably, Anne won, with a throw of over 100 ft. and on the same night won the shot putt event for good measure. Travelling to Bradford for the second competition, the Airedale and Spen Valley Women’s Trophy Meeting, Anne threw the javelin 104 ft. 5 ins, and her nearest rival achieved 30 ft. less! Anne was still 13, and her opponents up to 16 years of age.

Anne’s success had an unexpected effect. When she travelled to Middlesbrough for the Yorkshire Championships, she found the field reduced to one – herself. All other entrants had withdrawn when they saw her name in the list.

Pushed in with the seniors, Anne threw 108 ft. 8 ins., and finished second, beaten only by Marion Pearson, the established Yorkshire Champion. The Junior title was already hers, and the throw put over 10 ft. on the championship record.

Anne, of 37, Old Mill Road, Conisbrough, has her sights set on the Olympics, but her next major competition will be the All-England Championships at, Motspur Park, Surrey, the day she will have to face the best juniors in the country.

She intends to win.