K.O.Y.L.I. Prize List
Presentations at Denaby
Sergeant Off To Gibraltar 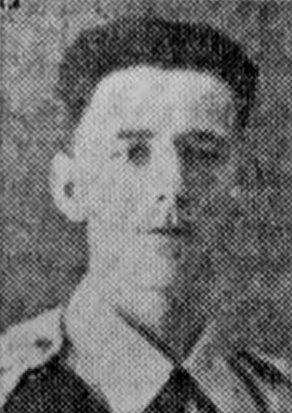 Presentations of gifts to Sergeant and Mrs McGrath, who had been at Denaby Drill Hall for the past four years, were made last Friday evening at the annual distribution of prizes at the drill Hall of “B” Company (Conisborough Detachment) of the 5th Battalion of the K.O.Y.L.I., Tributes were paid to their excellent services during that time.

Sgt McGrath (picture), who is leaving shortly for Gibraltar to take the place of Sergeant Thomas Mercer, who has arrived at Denaby to relieve him, has been resident staff instructor for “B” Company. Mrs. McGrath who has had charge of the club in connection with the Drill Hall, will follow shortly.

Captain H. Kinnear, presiding, said it was the first occasion on which he had the pleasure of addressing the company as a company commander and he wanted to welcome them. He understood that there were between 500 and 600 people present. They were pleased to see their new Brigade Commander, Col Audbrey, and it was saying a lot for his interest in the battalion that he had time to come into Denaby to see them.

Capt Kinnear also welcomed Colonel St Andrew Warde-Aldam, the honorary Colonel of the Battalion, and Colonel A. Smith, the Battalion Commander. Captain Kinnear, had taken great interest in the work at Denaby, and he would remind them that Colonel Smith started the company. “B” company had always been a good company, and he wanted to say they were very glad to have Colonel Smith present their prizes that evening.

Colonel Smith also thanked Sergeant McGrath for his excellent work and welcomed Sergeant Mercer, the new resident staff instructor. Some of the boys who had joined the company, said Colonel Smith, in the last four years would not realise the work of their predecessors had put in when the company was formed.

In 1921 he was asked to form a company at Denaby. He was given no quarters and he had no personnel, but within 12 months they had 125 members, which made them the strongest company in the battalion. All the accommodation they had was a little hut that they used to call Spion kop.

It was situated at the top of the Crags and it was a stiff climb to get there, but it had the advantage of keeping the generals away. He wanted to pay tribute to the members of the company in those days. They also have some rotten weather and the men used have to make the climb, but they used to do their work and drills with the result that they made the Denaby company what it was. In 1924 the Drill Hall was opened and since that day the company has been second to none in the battalion.

He wanted the boys in the company to realise that in the Denaby company they had joined a very good company with a great tradition.

He urged the boys in the company to play the game and keep up the record of the Denaby company. As territorials they had a great responsibility at the present time for the territorials were responsible for the defence of the country, and they should, therefore, make themselves as efficient as possible. Last year the Queen visited the battalion, and she told him how pleased he was with the appearance of the battalion. A few weeks ago he received from Colonel Soal, their late Brigade Commander, who said that if he was going into war he would like to have the fifth Battalion of the K.O.Y.L.I. With him. That was a great tribute, and he was looking forward to the future knowing that not one boy of the whole battalion would let the battalion down.

After Col Smith had presented the awards Mr. T. Guest. Secretary of the honorary members of the Drill Hall club, made the presentations of a handsome timepiece to Mrs McGrath and a suitably inscribed cigarette case to Sgt McGrath.

Col Smith mentioned that private D Jones gained a Lewis gun competition prize and an efficiency medal, but he had died since the annual camp, and he would ask Col. Warde-Aldam to present the awards to Private Jones’ widow. Mrs Jones then came forward and was so moved that, following the presentation, she burst into tears.

Col Warde-Aldam congratulated captain Kinnear on the start he had made as company commander. It was apparent from the enthusiasm shown that night that captain Kinnear had got a good hold of the company and was going to keep it the best company in the battalion. Last year, said Col Warde-Aldam, he appealed to the young lads and women of Denaby to make the company as proficient as possible, and it was quite obvious that the lads and lasses had done their share.

He also wanted to congratulate them on the fact that they were over strength and that there was a tremendous desire on the part of the men to attend extra drills. Col Aubrey, the new brigade commander, said that on reorganisation two battalions of the K.O.Y.L.I. It had been allocated to his brigade, and he was very glad to receive them because he had spent all his experience in an infantry brigade.

During the evening an enjoyable time was spent dancing.