Three of the four retiring members were re-elected, the unfortunate exception being Mr. Tom Oxley in the North Ward, beaten by a popular Labour candidate. Mr. Leonard Worsley.

Labour Failed in three wards, but succeeded in returning Mr. Jonas Shelton in the Denaby Ward, against a strong candidate in Mr. W Still, The manager of the Denaby colliery.

Mr Tom Hill was again defeated in the South Ward, where the combined Labour vote was insufficient to unseat Mr. Wells

The new members are Mr. Wolsley and Mr. Maxfield. The latter obtained a decisive victory in the East Ward. Where there were four candidates, one of whom secured only eighteen votes There were two official Ex-service candidates, Mr Oxley and Mr. Benton, and another, Mr. Platts, with strong claims to be so regarded, and none of them succeeded.

There are now three Labour members out of fifteen- Mr. Urch. Mr. Shelton and Mr. Worsley. The parish council which immediately proceeded the urban council was practically entirely Labour in the Board of Guardians election. The three retiring members. Mr.Roberts. Mr. Urch and Mr. Oxley were comfortably returned, though Mrs. Hill, one of the in defeated candidates polled remarkably well 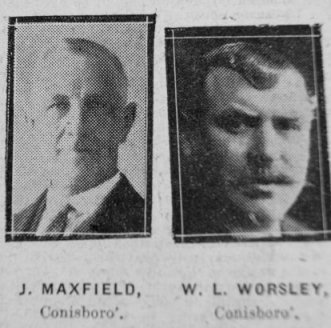