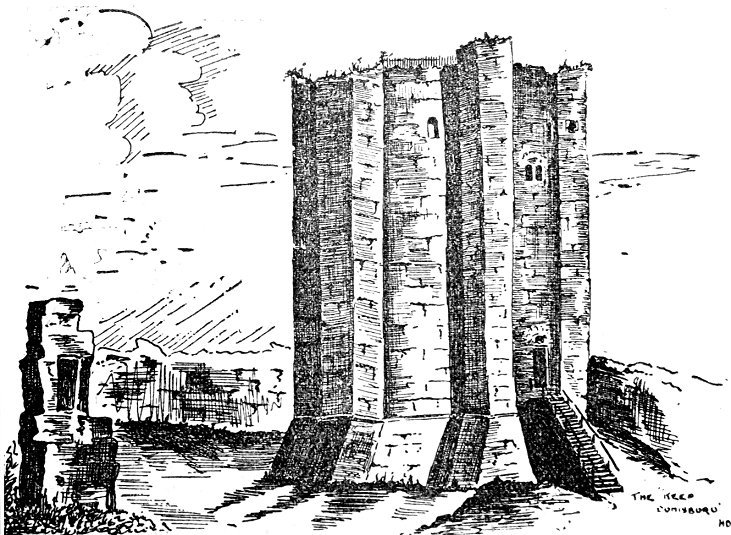 Of Conisborough and its castle so much has been written that to prepare an intelligible summary conformable to the space  allotted here is a matter of  difficulty.

Conisborough has claims to great antiquity. The earliest positive mention the place is about the year 1000 but there is the evidence at Geoffrey of Monmouth, the 12th century chronicler, in support of the belief as early the filth century, a stronghold of some kind existed there. A mound near the castle wall is referred to the loud, of Hengis, the warlike Jute who, is consideration for the depredations he anciently wrought against the Picts, along with his brother Horsa, was made king of Kent in the fifth century.

Upon this shadowy background Geoffrey of Monmouth has woven a dramatic narrative which, prosaically rendered by Hunter, tells us that Aurelius Ambrosius is made King by the Britons, then oppressed by the Saxon power.

Hengist, with a large army, prepares to fight with him in a field called Maisbeli (Mexborough) through which knows that Ambrosius intends to pass. Ambrosius marches with his army thither, knowing that Hengist prepared to meet him.

A great battle is fought in that held in which Eldol, Duke of Claudiocester, distinguishes himself on the side of Ambrosius. The Saxons are defeated and Hengist flies to Caereonan now called Cunungeburg. Ambrosius pursues him, slays some of his troops and makes slaves of others. When Hengist saw that Ambrosius followed him, he would not enter the town, but getting his people in order, he prepared for a second battle Eldol and Hengist come to an encounter in single combat Eldol takes Hengist by the nose-hale (nasale) of his helmet, and drags him from among his people, who are then entirely routed and fly in all directions.

Having gained the victory Ambrosius took Coningsborough and remained there three days. He ordered the dead to be buried and the wounded to be taken care of. It next became a question what should be done with Hengist. Eldad, Bishop of Claudiocester, brother to EIdol, when he saw Hengist standing before the King, ordered the rest to be silent and spoke thus: “Though all should vote for the liberation of this man, yet would I cut him in pieces.” But Ambrosius, a mild and gentle man, ordered Hengist to be decently buried and a mound of earth raised over his body, according to the custom of the pagans.” Thus, though Geoffrey’s object might have been dramatic effect, the Hengist tradition is nevertheless well grounded. The tumulur has not been explored.

The earliest mention of Conisborough in authenticated history is about the year 1000 when Wulfric Scott, an able Thane and the minister of Ethelred the Unready, bequeathed to Alfhelm certain lands and fisheries which, according to Domesday Book, comprised part of the Soke of Hatfield, when the Lord of Coningesboro’ had twenty fisheries at Tudworth, four yielding 1,000 eels yearly. It would thus appear that at that time Conisborough had become the centre of au important demesme. How the potential Earl Godwine became possessed of Conisborough history does not say but that it was purchased or inherited by his second eson. Harold, afterwards King Harold the Second, admits of no dispute. The Conqueror granted the estate to his adherent, William de Warranne who married the King’s fifth daughter, Gundreda.