With Mansfield Town engaged in the F.A. Cup competition, Lincoln City took the chance of increasing their lead in the Midland League on Saturday, when they obtained their tenth successive win by beating Wombwell 3 on the Sincil Bank.

It was a keenly-fought contest, although a boisterous cross wind prevented good football. The visitors were game to the finish; indeed it was six minutes from the end that they obtained their goal, and in the short period remaining they very nearly repeated the performance. For Lincoln, Harrison, Kitching (penalty), and Hargreave scored, Wombwell’s goal being gained by Staniland.

A keen game was witnessed at Scunthorpe, where Denaby United were beaten two goals to none. Denaby were strongest in defence, and kept clean sheet for over an hour, but one of the defenders then unceremoniously bowled over Webb, and Wadsworth scored from the penalty kick. Two minutes from the end, following another freekick, Maw drove the ball through a crowd of players.

Rotherham United Reserves were beaten 2-1 by Grimsby Town Reserves at Millmoor. Grimsby set a fast pace, which was maintained practically throughout the game. Wilson gave the visitors the lead after 25 minutes. Rotherham showed considerable improvement after the interval, and Cooper got a good goal after about 20 minutes in the second half. Wilson gave Grimsby their winning goal ten minutes from the end. Atter, in the Rotherham goal, had to deal with some difficult shots.

Barnsley Reserves were unlucky to be defeated 4-1 by Hull City Reserves at Anlaby Road, after running level until the interval, when the teams had scored a goal each, Fletcher being responsible for Barnsley’s only goal. Up to this point Barnsley had played the better football, but Hull put forward vigorous efforts in the second half. Nelson, the former Sheffield junior, secured the lead, and the same player made the issue safe for the home team with two more goals in the closing stages.

Mexborough Athletic, at home, easily mastered Chesterfield Reserves by three goals to none, Briggs (two) and Storer being the scorers. Mexborough adapted themselves the better to the difficult conditions. Briggs showed penetrative form, and Storer was lively on the home right wing. The defence of the home team was always superior to the indifferent attack of Chesterfield, who were best served by Bilcliff, a good goalkeeper, who did not receive adequate support from his backs.

Frickley Colliery gave a greatly improved display to beat Boston 1-0 at South Elmsall. The forwards adapted themselves well to the terrible conditions, and played with excellent harmony, while Boston persisted in making short passes, which were of little avail on the heavy ground. Turnbull, who was the pick of the forwards, scored the only goal after a brilliant run down the left wing. Boston strove desperately for the equaliser in the closing stages, but Bromage, the Frickley goalkeeper, was in great form, and made some magnificent saves.

Wath Athletic accomplished their best performance of the season by beating Newark Town 3-0 at Newark. It was the South Yorkshire club’s first win in eight matches, and their first away from home. Whittaker distinguished himself in the Wath goal the first half, and the sides were level at the interval. Nine minutes after the restart, Moore scored for the visitors, who, getting the most out of the wind, did a lot pressing. Smith added two more goals for Wath, who won as easily as the score indicates.

Notts County Reserves continued their run of home successes by beating Staveley Town 3-1 though the latter put up a much better show than anticipated, and held the lead at the interval through a lovely goal, after 35 minutes, Eggleshaw. Just previously the same player hit the upright. In the second half the home side improved, and Mitchell (two) and Hilton scored for them. 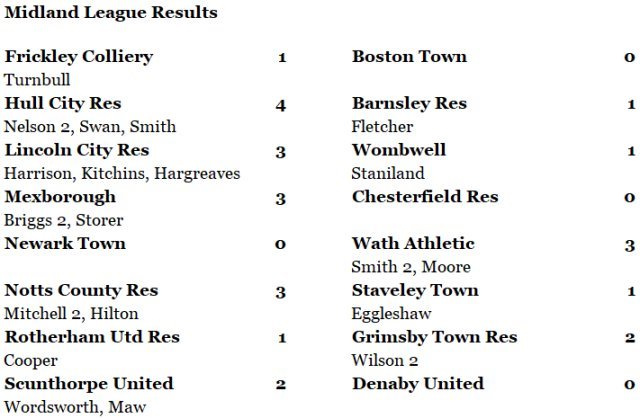