Miner’s Son Alan Has Signed For The Wolves. 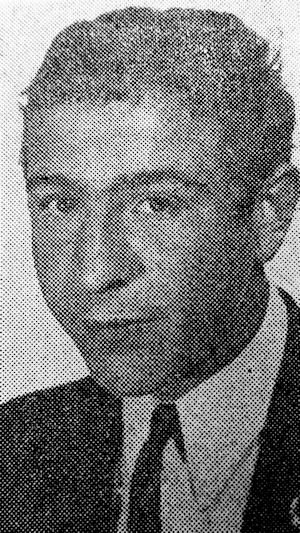 He is one of many local youngsters to be helped on his way by former Wolves winger, 60 years old Mark Crook. Mark hung up his boots in 1937, and since then has been running the Wolves Juniors “nursery” at Brampton.

Alan, a striking inside forward, was first seen by Mark in a schoolboy match. He has played for Wolves Juniors for the last 12 months, and scored their only goal in his last match for them away to York City on Saturday.

“He has made very good progress with us, and should go a long way,” Mark told me this week.

“But he isn’t putting everything on football. At Wolverhampton he will be attending night school to continue his studies.

“This is something we always encourage our youngsters to do – guard against being thrown on the scrap heap later in life.

“I’ve been doing this job encouraging when you help a lad like Alan along.”

On the first Saturday of his appointment with Wolverhampton, Alan played for the local fourth team against a local Wolverhampton team. During the course of the match Alan scored the equalising goal. Since Alan has been at Wolverhampton, he has played in every position on the forward line.

Alan’s German born mother added, “At Wolverhampton he will study for another four ‘O’ levels in his spare time. He will study German, biology, chemistry and English literature.

“These lessons at the local college will be fully paid for by the football club.”

Both Alan’s parents agree that Alan will probably remain in some aspect of sport.  The academic qualifications are merely the safeguard of a person with the right ideas.

“Alan has signed a contact to stay with Wolverhampton for three years as an apprentice; but he may very well be signed up as a full professional if he satisfies the club of his capabilities before the contact expires.

“He has been interested in football all his life,” his father added. “He has played in the Don and Dearne under 11 and under 15 teams as well as for the Yorkshire Boys team and his school teams.”

From Denaby to the Wolves