A Corner of the Ladies’ Room 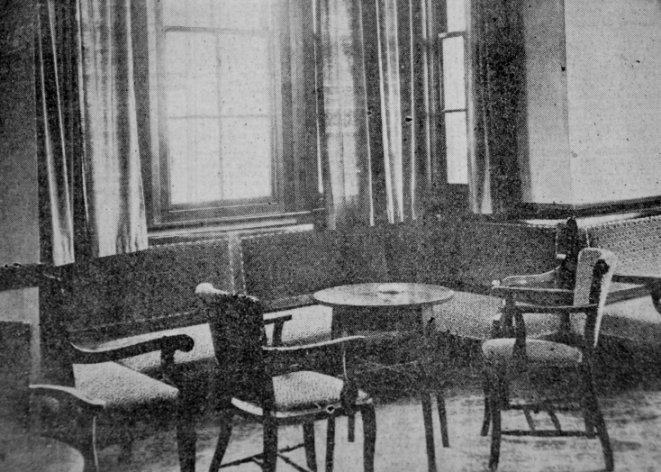 The building which is described in the preceding page of this paper, is the work of Mr. W. G. Robson, of Sheffield, executed to the designs of Mr. H. L. Smethurst, architect to the Denaby and Cadeby Collieries, Ltd., and it contains some splendid features. It is situated on land between the football and cricket grounds, and stand four square, with an annex at the north-west corner to serve the purposes of a cricket pavilion.

At the rear is a splendid swimming bath, informally opened several weeks ago, and greatly used. The swimming bath has been designed for adaptation for the purposes of a winter cinema and has accommodation for nearly 800 persons.

The Institute itself comprises a large entrance hall, with games rooms, lounge, canteen, slipper baths, reading rooms, ladies’ rooms, lecture room (which may also be utilised for dancing) and a very handsome billiard room, containing three tables. The building is furnished and equipped in the most elegant and modern manner.

The original estimate of the cost was £11,000, but the final cost is probably nearer £14,000. This is met by grants from the Miners’ Welfare Fund, based on the tonnage of the Denaby and Cadeby Collieries. The Institute is intended to serve all the social purposes of the neighbourhood, and is to be available not only for the miners and their families, but for the whole community, the colliery employees and their families, however, being accorded a slight preference in the matter of subscription rate, which is fixed in their case at the nominal sum of 2s. a year.

The work has been organised by a committee representing the colliery owners and the colliery workmen and the property is vested in local trustees.