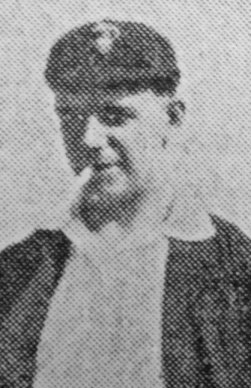 The rules of the competition state that any time lost at the tea interval shall be made good, to keep the period of play to the 4 ½ hours, inclusive of a ten minute tea interval. On this occasion ten minutes lost at the interval were not made good: and they would probably have keen enough to enable Conisborough to win, as they were Only 12 runs behind Aldwarke’s big total, with 8 wickets still intact, when stumps were drawn. The occurrence may jeopardise Conisboro’s chance of the championship.

For the strong position they did achieve they were largely indebted to Soar (picture), who played a great forcing game and by hitting up 100 in just over the hour put up the finest innings of his career. He hit 2 sixes and 12 fours. Biggs who did so well in the Cutts Cup semi-final tie, maintained his form and made his highest score, to remain unbeaten at the close. He hit 3 sixes and 6 fours. Biggs is still under 20 and shows every promise of developing into a first-rate batsman.

Conisboro’ made a fine effort to force a win against time, for Aldwarke kept the wickets for nearly three hours. In spite of the big scoring Hammond secured 5 wickets.