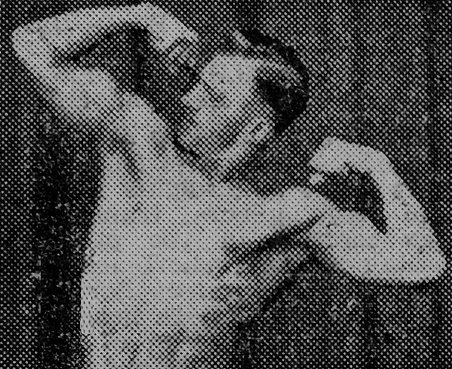 ” Mr. Britain, Senior,” fresh from his recent triumph at the London Palladium on Saturday, went to his work at Cadeby Colliery canteen the following Monday, and became ordinary Stan Sanderson again. Perhaps “ordinary” is a misnomer, for this 41-years-old man from Denaby Avenue, Conanby, has had more than his share of excitement and fame.

On Saturday he had appeared at the Palladium with two other finalists to compete for the title of Senior “Mr. Britain ” (the junior title had been won by a Leeds man). Before this final he had won the divisional elimination contest for the North-Eastern area, and he completed his victory by winning outright. The contest had been promoted by the Health and Strength League, for physical perfection. It was the first time Mr. Sanderson had entered, although he had given several demonstrations of hand balancing and physical culture.

Mr. Sanderson I.as been interested in this health-giving routine ever since boyhood, and has widened his sphere of athletic activities to include football, athletics swimming, gymnastics, weight-lifting, and judo.