Holder of King’s Medal For Bravery. 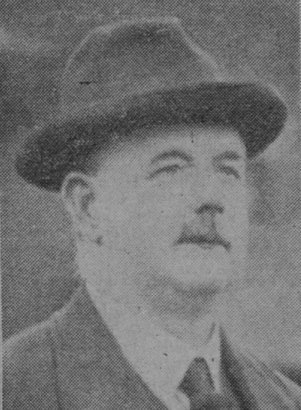 For the second year in succession the Cup-tie at Bramall Lane, Sheffield, in the first big round of the English Association Competition, has been the occasion of tragedy. Shortly before Saturday’s game between Sheffield United and the Corinthians started Mr. Harry Hulley (39), of Stone Grange, Maltby, collapsed. He was accompanied by his son, and medical assistance was quickly at hand. He was taken to a house, 117, John Street, and a doctor was sent for. He was then removed to the Royal Hospital, but was dead on arrival.

It is exactly a year since a similar fatal collapse occurred. On that occasion—January 10th, 1931—the victim was Mr. Charles Woollens, a veteran master printer, of Sheffield, who had gone to see the Cup-tie between United and the team from his native city, York. What makes the coincidence all the more striking is that in his case also the collapse was a few minutes before the kick-off.

The late Mr. Hulley was a man’s man,” writes our Mexborough and district correspondent. His unexpected death came as a shock to the thousands of miners at the Denaby, Cadeby, and Maltby Main Collieries, in connection with which he had held the responsible position of agent since 1929, when Mr. L. C. Hodges took over the general management of the Yorkshire Amalgamated Collieries (Denaby, Cadeby, Maltby, Rossington, and Dinnington).

Said a Cadeby miner when the news of his death spread on Saturday night: “ He has gone to his last goal; he played a fine game, and scored many, many times.” This tribute is appropriate, for both in his work and his play the late Mr. Hulley was keen and enthusiastic, and had respected qualities of leadership when he made his way through the coal mines to the prominence he attained recent years. He loved the great national game, and himself participated in them well. In his youth he played for Sheffield Wednesday F.C., and in later years was for a time chairman of the Midland League club, Denaby and Cadeby United, and member of the Management Committee of the Midland League.

His courage was manifested following the tremendous explosion disaster at Cadeby Colliery in 1912, and which had the sequel of the award to him of the King Edward Medal. He commenced his coal-mining career at Rotherham Main, and his long and progressive association with Cadeby Colliery started nearly 30 years ago, and resulted in his rises, successively, from night deputy (the position he held at the time of the Cadeby calamity) to under-manager and manager respectively, and on to the managership of Maltby Colliery, and from thence to the three colliery” agent, a position he held up to his death.

His interest in the welfare of the miners was reflected in many ways. Always an enthusiast in the forwarding of first-aid knowledge, he became one of the Assistant Commissioners of No. 5 District of the St. John Ambulance Brigade. He was a member and past-chairman of the Fullerton Hospital Board, chairman of the Miners’ Old-Age Permanent Help Fund at Denaby and Maltby, chairman of the Denaby Institute, president of the Denaby Officials’ Club, and a voluntary official and supporter of many other welfare organisations.

When his death became known the Denaby and Cadeby officials immediately abandoned the games they were to have played in the Yorkshire Amalgamated Collieries Recreation League, Saturday night.

Mr. Hulley, who was born at Greasbrough, leaves a widow and three sons. Of the latter, Mr. Norman Hulley is manager of Denaby Colliery, Mr. Donald Hulley holds an appointment at the offices of the Denaby and Cadeby Collieries, and Mr. Leonard Hulley is a student at Sheffield University. The late Mr. Hullev’s last public office was to unveil Maltby Church, on January 3rd, a stained-glass window, erected in memory of the men who lost their lives in the Maltby Colliery disaster. 1923.