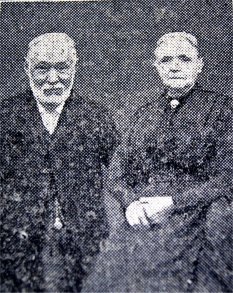 The golden wedding of Mr and Mrs John Rowland Proctor of Glasshouse Row, Conisbrough, was celebrated on Sunday. Mrs Proctor, who was before her marriage, a Miss Elizabeth Wilson, was born in Sheffield on 28th October 1843, whilst her husband was born at Rotherham on 28 November, 1841.

It is interesting to recall that Mr Proctor’s father, who was a joiner, was one of the persons who assisted George Stephenson to complete the first model of a railway engine.

John was apprenticed to his father’s trade when he was but nine years of age, and was then living in Lincolnshire. He left Lincolnshire when he was 19 years old, and came back to the place of his birth, Rotherham, removing nine months later to Conisbrough, where he has lived ever since.

The happy old couple were married in the year 1865 at the Conisbrough parish church by the reverent Lodge. They have four children, one son and three daughters, and 10 grandchildren. We offer to Mr and Mrs Proctor our heartiest congratulations