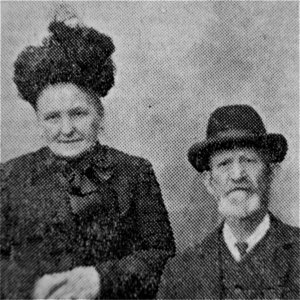 Mr and Mrs Thomas Stenton, who reside in Church Street, where they are engaged in business, celebrated their golden wedding on Monday.
The happy couple were married at Braithwell parish church by the reverent, J Reece, on May 17, 1864.
Mr Thomas Stenton was born at Braithwell on February 23, 1841 and Mrs Marion Stenton was born at Brigg, Lincolnshire, June 11, 1843
Mr and Mrs Stenton came to live in Conisbrough on January 4, 1872, so that 42 years of their married life have been spent in Conisbrough

From a family of eight members Mrs Stenton and her twin brother, Mr Moses Brocklesby are the only two who have celebrated their golden wedding, there being another sister, who is a widow. There are three children living, and two others died. There are six grandchildren. They have occupied the present address for 20 years.

Mr and Mrs Stenton was the recipients of many congratulations and presents on the auspicious occasion.