Members of the St. John Ambulance Brigade, of which deceased was a member, acted as pall-bearers. The Wesleyan Mission Band was in attendance.

At the time of the 1911 Census, Herbert Neal, born in Tathwell, Lincolnshire, was listed as a Fireman and lived with his wife of 13 years Katherine aged 35 who came from Corby in Lincolnshire.

Also living with them was their son, George William, aged 13 and apprentice to a Baker, daughter Violet Annie Neal, aged 7 and brother Frederick Neal aged 27 and employed as a Labourer above ground – all born in Lincolnshire Herbert Neal’s headstone 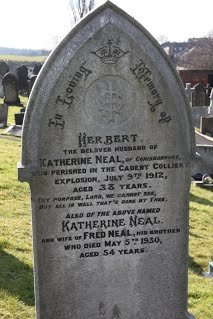 inscription: The beloved husband of Katherine Neal, of Conisbrough, who perished in the Cadeby Colliery explosion, July 9th 1912, aged 33 years Thy purpose Lord we cannot see But all is well that’s done by Thee Also of the above named Kathrine Neal and wife of Fred Neal, his brother, who died May 5th 1930, aged 54 years