The  pleasant town of Doncaster,” as Sir Walter Scott described the neighbouring butterscotch borough, is being rapidly encircled by a thick network of railways.

The latest to get it well within its iron grip is the Dearne Valley Railway, which is fast nearing completion. Doncaster is much talked of as the colliery capital of the future. The average Doncastrian does not accept this statement with too great a show of gladness. Collieries are excellent things for Barnsley and Mexboro’, but Doncaster regards the prospect of the advent of the black diamond and its attendant fumes and smoke with a certain amount of toleration and complacency, and nothing else. It is getting accustomed to the idea, however, and settling down to the inevitable. 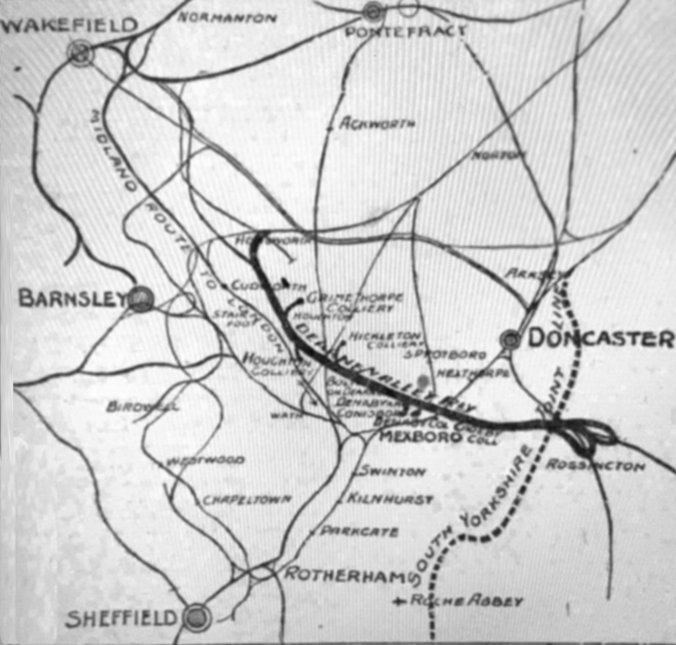 Meanwhile Doncaster is large railway centre, with seven railways running through it. and though there are large and important collieries within a few miles, and others are in course of construction at its very doors, the town still retains much of the charm which caused Southey speak well of years ago, and there are some captivating nooks and corners within easy distance of its many walls and “gates.” Acts of Parliament may be passed and companies, floated, but fortunately it takes time to set them in operation, or the charming valley of the Don would have lost most of its beauty spots, and the pastoral aspect of the country around Old Danum would have disappeared long ago.

Despite colliery enterprise and railway development the district is fair to look upon. In years to come when the new pits at Bentley, Brodsworth, Frickley, and possibly at Edlington and Cantley are fully opened out it will become another black country.” The various railway companies are preparing for future developments.

It was in 1897 that the Dearne Valley Railway Company obtained an Act of Parliament which gave them power to construct a line commencing with a junction with the Hull and Barnsley Railway at Shafton near Cudworth, and terminating with a junction with the Great Northern Railway and the Great Northern and Great Eastern joint line at Black Car, two miles south of Doncaster. It is far reaching and many-fanged, having numerous connections and branches, and it includes within its scope branches the Grimethorpe Colliery and the Houghton Main Colliery, a connection with the Swinton and Knottingley line at Thurnscoe, a branch to the Hickleton Colliery, a connection with the Cadeby Colliery, and a branch to the Denaby Main Colliery.

The latter is rather peculiar, because it is partly made by the Lancashire and Yorkshire Railway Company, but it is explained by the fact that the latter company have a considerable interest in the Dearne Valley line.

Including branches the new line is about 22 miles in length, and at the commencement, near to the junction with the Hull and Barnsley, there is a junction with the Lancashire and Yorkshire line from Crofton, near Wakefield; then the line passes close to the Houghton and Grimethorpe Collieries, over the Swinton and Knottingley branch of the North-Eastern this and Midland Railway at Goldthorpe, further it gets close to the village of Barmbro’, noted for its cat and man fight, and to the Cadeby Main Colliery, and across the river Don into the very heart of the Ivanhoe country, then through Conisbro’ Cliffs and under the Doncaster and Sheffield main road when two miles south-west to Doncaster it terminates at Black Car.

At Black Car the line is crossed by the South Yorkshire joint lines with which there is a connection. After proceeding under the Sheffield road the line touches the parish Warmsworth, the early home of the Quakers, and Loversal runs close to the old well at St. Catherine’s. According to Miller, the historian, this well was once a place of “considerable resort” for the benefit of cold bathing, It was in his time a most delightful meadow where a circular stone bath was built, and the bath was supplied with water in a few minutes a strong spring that had its source there and fell into the little river Tome near Holmes Car. An elderly woman from Loversal attended every, day during the summer season as an assistant to the bathers who were accommodated with dresses gratis and frequently breakfasted in that charming retreat. Needlfess to say, the old custom has disappeared. The well remains but there are no bathers. The railway runs close to this still charming spot, which ie a frequent haunt of lovers and curious folk.

The principal engineering feat or work of interest is the magnificent viaduct across the Don Valley and over the river at Conisbro’, which is a little over 1,500 feet long witb a maximum height of 110 feet above the river. It is of exceptional height and one of the largest bridge building undertakings of recent years. It is unequalled in Yorkshire in length and size save the great viaduct at Denby Dale- It is crossed by a steel bridge of 150 feet span, with the arches of the viaduct on each side. There are 21 arches of 55 feet span built of red brick work faced with blue bricks. Over 11,000,000 bricks and 2,000 tons of cement were used in the construction of the viaduct. It may be interesting to note that the viaduct was constructed mainly from an overhead cableway which is now a great feature in bridgebuilding work. It had a span of 1,875 feet, and stretched entirely across the valley, whilst at the same time it was capable of lifting a weight three tons and carrying it to different parts of the work. Its great height, its length, and its numerous arches, will always make the Don viaduct an object of exceptional interest, and is disfigurement to the valley—an engineer would aver that it is a splendid addition, and is a permanent record of the difficulties that can be surmounted by modern engineering skill.

From the viaduct the line makes its way through the Doncaster and Sheffield road near the top of Conisbro’ Hill in a rock cutting 70ft. deep. This is the heaviest piece of cutting the line, and involved the excavation of over 400,000 cubic yards of limestone rock. The Great Northern and Great Northern and Great Eastern joint lines are respectively crossed by large span steel bridges of 197 and 150 feet respectively throughout the line. The skewbridge carrying the two lines of the Dearne  Valley over the Great Northern Railway is one of the longest skewbridges in the country. It has two outside steel-braced girders 197 ft. long by 19ft. deep, and a flooring of steel cross girders. The cost of the fourth section of the line, which ends at Black Car, is quarter of million. The new line has been constructed to cater for the mineral traffic of the district. Only a single line of ways has been laid, but the promoters have their eyes on the possibilities of the future, and the immediate development of the South Yorkshire Coalfield, and expect to secure substantial portion of the coal traffic from the new collieries along the route and on the lines with which it is connected. At the same time the prospect of passeenger traffic has not been unthought of, and the work has been carried out with view to the introduction of that class of traffic. Sites for stations have been secured at Loversal and Edlington, where it is probable, any way the latter place, colliery workings may some day commenced. The new line is completed and in use far as the Cadeby Colliery.

The last section from about 11 ½  miles to the Black Car is in progress, and it is expected that it will be ready for traffic about the end of the present year.

About 500 men are or have been employed on the works. The majority of them have lived in Doncaster, and as some proof that the navvy is not quite so bad as he is painted, it may said that he has given no trouble to the authorities. Many of them live at the lodging homes, and as they begin work early and have long distances to go to their work, they are not “night-birds.” They to bed early, and seem to be a steady industrious lot men for the most part. Only one fatality has occurred during the carrying out of this great and difficult undertaking. It was in connection with the viaduct, and when the staging on which the steel bridge was built was being taken down.

Several well-known engineers and contractors have been engaged in the work. The engineer for the construction of the line is Mr. Stanley K. Kay, of Leeds, and the resident engineer for the construction of the section from Conisbro’ to Black Car is Mr. R. H. Clayton, of Avenue Road, Doncaster, who is also the maintenance engineer. The contractors for the works now in progress are Messrs. Hy. Lovatt and Co., Wolverhampton. The first six miles of the line were constructed by Messrs. Naylor Brothers, contractors, Huddersfield, and the second six miles from Thurnscoe to Cadeby with their branches were made Messrs. Gates and Hogg, of Doncaster, Mr. N. R. Wilson being the resident engineer.

The Big Viaduct at Conisbrough – A Huge Engineering Feat (photos)

Floods in the Don and Dearne Valleys