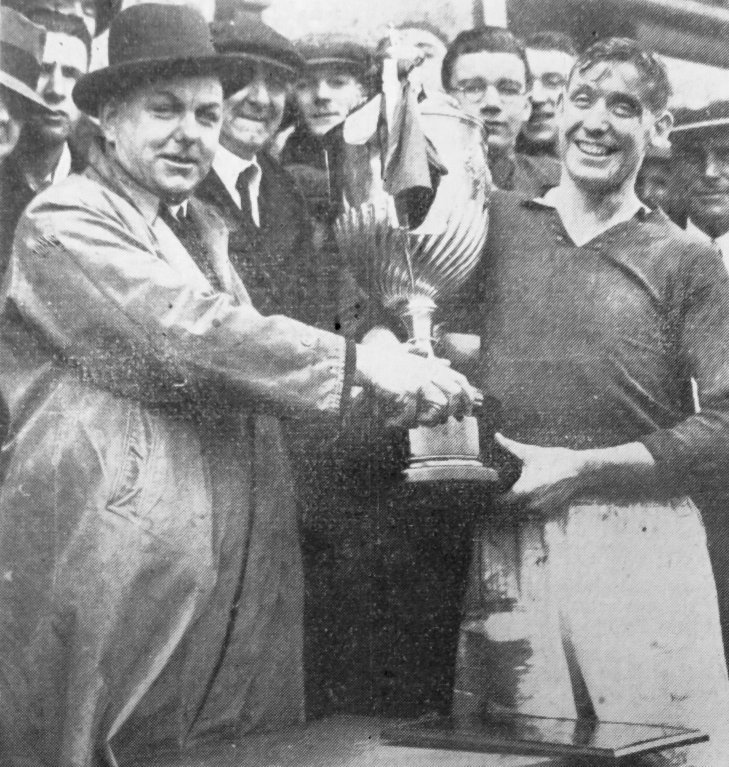 Mr W.P. Marsdin handing over the Montagu Cup to Roberts, the North Cliff captain,
after their defeat of Station Lane, Wombwell

A Gale that lashed thick snow into a blizzard, a cheerlessly murky patch of turf and a standard of play that would hardly have done justice to a junior practice match!! What a bleak combination for a Good Friday morning!!!

This was the Mexborough Montague Cup final in this year of grace 1937, but to be perfectly honest-one of the worst. It was not that the weather put the damper on, there were only two real flashes of cup tie football throughout the whole of the game-and sixty seconds worth of excitement was a poor reward for the loud crowd that lined the stands and terraces at Hampden Road on such a dismal day.

Northcliffe were worthy- rather then good- cup winners. Their first goal was well merited in spite of the fact that it was scored a penalty kick; their second, 11 minutes later, one of the mornings bright spots. But their forwards, with perhaps, the possible exception of the right flank, played as though they were having a little ball practice rather than helping to decide a cup final. There was a great deal more solidity about their backs then those of Station Lane, but the Station Lane forwards were beaten so often to the ball that the Conisborough halfback line had quite a profitable morning. To my mind, their key men wear their old Midland league players. Machin, at centre forward made three of their goals and Jones and Roberts, in the halfback line, had a comparatively easy job in holding the very rare and very patchy station Lane advances. Carter, at outside left, was quite lively.

Judging Station Lane by their first half mood, they were disappointing. They promised much but fulfilled little.  They gave the impression that once they had settled down they would prove the more effective combine. But they never seem to make their minds up to settle down, and if they had, there is little doubt that any good work they might have done would have been spoiled by lack of anticipation and faulty footwork. I shouldn’t like to count how many times a Station Lane forward literally handed the ball on a plate to the North Cliff halves by taking it faultily. Instead of holding it and speeding it on its way, they allowed it to rebound haphazardly to the waiting toes of their shadowers, and it caused their own defenders no end of trouble. There was a weakness, too, on their right flank. Pretty stuff was hardly the right line of attack on such a morning.

There were, however, these partially compensating goals, Northcliffe’s second and Station Lane’s magnificent onslaught in the first 40 seconds of the second half. 40 seconds they were a team and half. Visions of a rousing tussle! Then the old scrappy stuff.

For well over 20 minutes this half they played as a spent force. The interesting fact about that was that it was Northcliffe who had made the most of the going. The match in brief (if you can get a mental picture of a great deal of patchy play with many irritating hold-ups and the the ball out of play every few seconds) was punctuated in the 29th minute with Carte’s Penalty goal for Northcliffe. It was a perfectly just decision. In the 40th minute Machin (always on his toes) put a difficult ball out to Carte, Godfrey made a despairing effort to dispossess the Conisborough outside left, but with a pretty move Carte slung the ball back into the centre where Tait, rushing up, slammed it hard into the back of the net as McGlasson slung himself in a great effort to get it, to the far corner of the post. Came half-time with no further score Northcliffe went off two goals to the good.

What a sensational opening to the second half! The whistle shrilled the ball swept across the right, back again to the centre, upfield, zigzagged, then – in rushed Prescott. Goal! Exactly 40 seconds had elapsed.

With only one goal in it there was every prospect of a fight. But old faults still persisted, and it was Northcliff (chiefly in the person of Carte) who went nearest to scoring again. They achieved their object after 23 minutes, Tait scoring another good goal on the run. Once again Machin was the manufacturer in chief.

Carte got the ball into the net again, but was well offside, and it was left to Barnes to get the fourth and last goal of the game with 15 minutes ago. You can tell how the game was going when I tell you that approximately one third of the crowd had dwindled away with still some five or 10 minutes ago.

The Station Lane defence was never thoroughly certain, Godfrey, Thorpe and Jackson seemed the most energetic of the five backs. The left flank was the better balance in the forward line. So closed a disappointing final. One pleasing feature was the “gate.” The bad morning seemed to have very little effect. Would that they could have had a better reward!

The cup was presented by Mr. W. P. Marsdin.