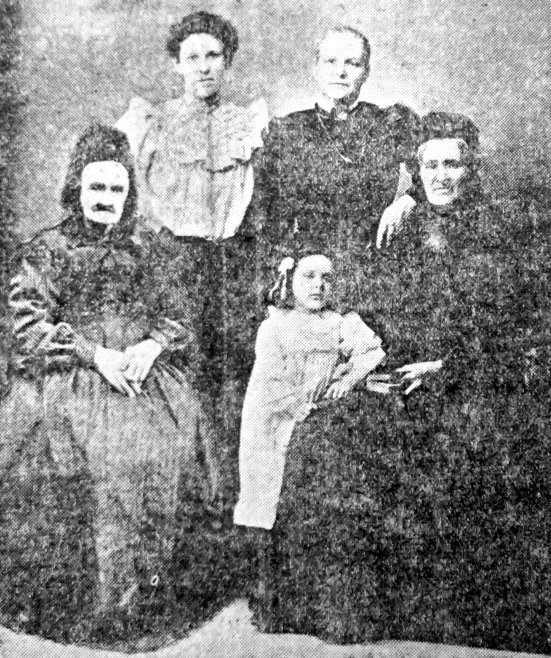 Since the death of the greengrocer who lived to be 102, the district has produced nothing quite so long-lived as Mrs. Mary Proctor of 7, Glassworks row, Conisbro’, a hale and hearty lady who will be 97 in the New Year. She has learned the secret of how to be happy and contented although living in an age which has no connection with her own, and has outlived all her friends and acquaintances.

At the advanced age of 96, Mrs. Proctor is not even senile. Except for a little deafness and a little natural infirmity, she is as bright and useful as when she was in her prime in the early part of last century. Only two years ago she made a couple of pillow-cases, as a wedding present for a grandson.

This remarkable old lady is the eldest of a family comprising five living generations. She has two sons and two daughters living; 21 grand-children 31 great-grandchildren, and two great-great-grandchildren. Mrs. Proctor is 92 years older than the youngest member of the family.

The old lady first caw the light on the 2nd  January, 1813, before the world saw our brilliant Queen Victoria. Her birthplace was Masboro’, and in 1834 she married a railway carpenter named Wm. Bowling Proctor, at the Sheffield Old Church. Shortly after their marriage they came to live at Swinton, where her husband assisted to build the now demolished Midland Station. From Swinton, the Proctors went to Castleford; from thence to Leeds, and back to Masboro.’ Then came a Lang spell of 25 or 26 years in a Linccolnshire village named East Barkworth, where Proctor set up as a cabinet-maker, and when he died 46 years ago. Upon his death Mrs. Proctor came to live with her son William, at Conisboro’, and subsequently with her other son, John, in her present residence.

She is a fine old lady, endowed with a wonderful memory. Always in her reminiscences the terrible boat-launching fatality of 1841 has a prominent place. She was an eye-witness of the catastrophe, which occurred upon the site of the present Great Central Railway Station in Rotherham, the canal having subsequently to be diverted to allow of the station being built. She is full of interesting stories of important happenings in South Yorkshire, such as the demolition of the jail at Doncaster, and of the riot on the Racecourse. Two of her grand-children served in the Grenadier Guards, one of them a young giant seven foot high, being cut short at the Modder River. Physically, the family is an especially fine one. Wm. Proctor lived to a good old age, and the rest of the family are strapping specimens of humanity.

Denaby’s Oldest is 95 on Saturday.