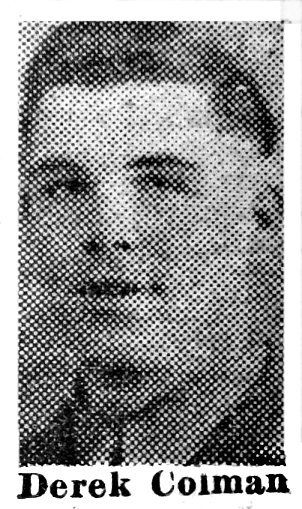 Mexborough and Conisbrough have this week a personal stake in the events which have made Persia and the Middle East the centre for world interest for the past few months.

While Conisbrough Paratrooper Derek Colman is preparing to go out with his Regiment to the Middle East, a move which is obviously associated with the Persian crisis, Mrs Grace Somerfield, Mexborough wife of an oil company official in Iran, arrived home on holiday on Wednesday.

Twenty-one-year-old Paratrooper Colman, only son of Mr and Mrs H. Colman, of Glengarth, Minney Moor Lane, Conisbrough, is attached to t h o Coldstream Guards. Either this week-end or the beginning of next week he will be leaving London for the Middle East. His  parents learned yesterday that his destination will be Cyprus. Derek volunteered originally for five years’ service with the Guards. He was in Tripoli and Palestine for over two years during the Israeli disturbances.

Now he has finished 72 hours embarkation leave and is awaiting sailing orders.  During these 72 hours he accomplished a lot. On Saturday he took out special licence and married 25-years-old I Miss Iris Hartup, of Carshalton (Surrey). Then he and his bride made a flying visit to Conisbrough, stayed overnight and returned to London, Derek to his barracks and, Iris to Carshalton.

How long he will stay, in the Middle East, Derek does not know. His service is due to end next March and he will then probably return to his old job as a bricklayer.

Mrs Somerfleld, whose husband, Mr G. H. Somerfield, formerly of Cowper Road, Mexborough, is a shipping officer in the fire department of the Anglo-Iraian Oil Company, is back in Mexborough for the first time in four years.

She is staying with her mother, Mrs F. Johnson, at 62, Hartley Street, where she lived before she joined her husband in Persia in 1947. With her is her 15-months-old son. John Charles, who was born in Abadan. Yesterday, a few hours after his arrival In Mexborough he was enjoying his first real sight of England.

Mrs Somerfield has not “evacuated,” she says. She has merely come home to “see which way the wind blows.” If the situation in the oilfields settles down within the next few months, she may go back. If not she thinks it likely that everyone out there will be sent home.

“At the moment” she said yesterday, “things are normal. There is no trouble. They have just nationalised the oil company and done nothing about it yet.”

Nothing out of the ordinary was really happening when she left Persia—and her husband—last week. But of her experiences and life in Abadan, Mrs Somerfield was very reticent. “I am not anxious to give an interview,” she told a “South Yorkshire Times” reporter.

Powers of the Admiralty – Drastic Action at Portland.