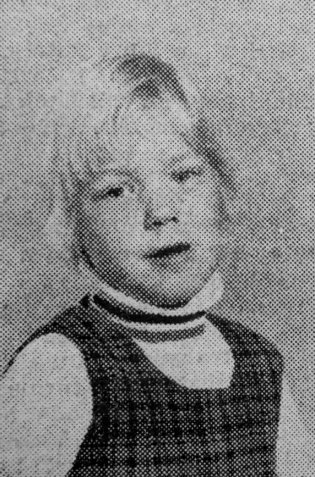 The parents of a five year old Conisbrough girl, seriously injured in a road accident on Tuesday are keeping up a vigil at her hospital bedside.

Little Pauline Mangham (5), of 26, Burcroft Hill, Conisbrough, her on her way to play school with her two sisters Denise (12), and Sharon (11), when the accident happened at Low Road, Conisbrough, only 100 yards from her home.

She was rushed to Mexborough Montagu Hospital with a Police escort, suffering from head injuries, Yesterday, (Thursday) she was said to be ‘poorly.”

The girl’s father, Mr Arthur Mangham, was rushed home from Yorkshire Main Colliery, Edlington, when told of the accident. He and his wife went on to hospital, where they have kept up a constant vigil, waiting for news of their daughter.

Her sister, Denise, said: “She was very excited at going to the play school for the first time and she dashed out into the road. The car hit her before we could reach her.”