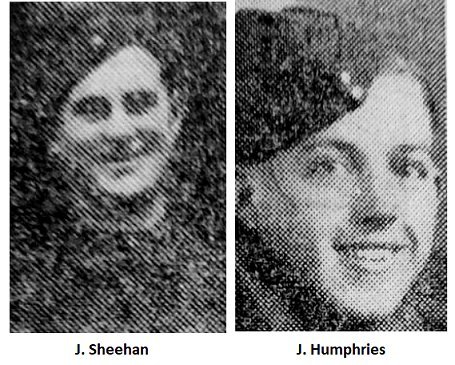 Lance Cpl Ken Milner, son of Mrs Milner, of 66 Ravenfield Street, Denaby Main, arrived home on Sunday evening after being a prisoner of war in Germany since May 25, 1940.

He was attached to the Pioneer Corps and joined the forces in April 1940. He had been in several camps, the last being Stalag 357 and from this they had been moved and had marched about 250 km and had passed the River Elbe when they were released by the British Army on May 2.

Lt Cpl Milner said the treatment had been bad at times and the food never good. He had done roadwork and formwork etc

Private Humphries was taken prisoner in Belgium. He had been in several camps and being in the same camp as Gunner Sheehan, they came home together.

Private Humphries had a shock when he arrived home to find that his father had died last December.

Gunner Sheehan was in the Territorials and was captured in May 1940, and he told our correspondent that he had been in various camps. Treatment had been rough and he had been badly treated for daring to rebuke a guard on one occasion. He had seen some of our men in the early stages tied up with the string that came on the Red Cross parcel until they had made the chains which later some of the prisoners had to wear.

He met private Humphries in March 1941 and they had been together since that time. He said they could tell the way the war was going because they noticed a change in the guards’s treatment and last few months the treatment had been greatly improved.

Gunner John Reddington, son of Mr A Reddington of 34 Cliff view, Denaby, will return on Saturday, and been a prisoner of war since May 1940, and had been in stalag 8B. He was released on May 1