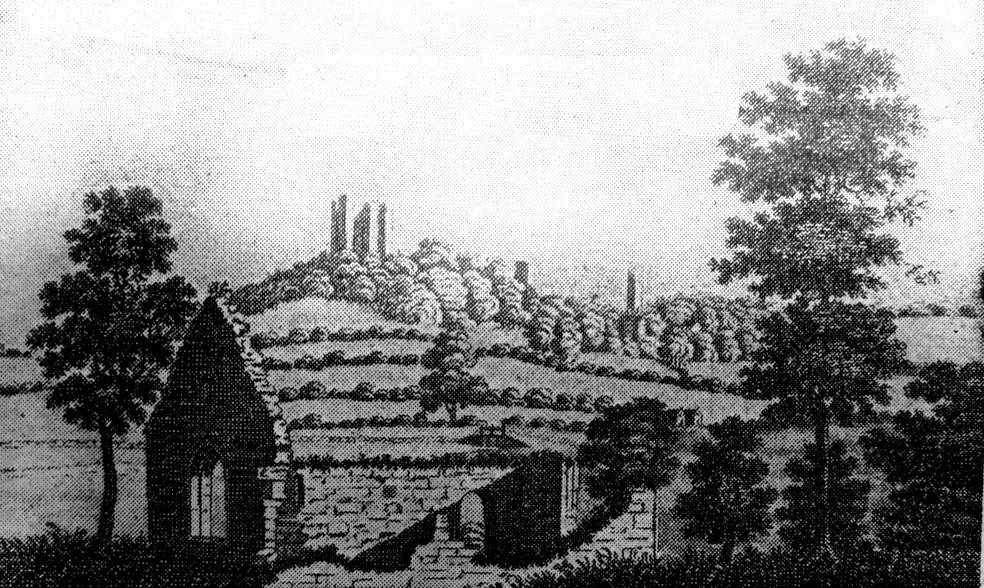 For this interesting picture of Consibrough Castle—and the strange dark ” building ” alongside—we are indebted to Mr. William Smith, former headmaster of Morley Place, School, Conisbrough, who kindly sent the picture along as a Christmas card ” to the Editor.

Mr. Smith, on our invitation, has supplied the following explanatory notes:

” The print or etching of Conisbrough Castle came to me some 40 years ago from Bradford as a gift from an old friend, who was a printer and bookseller. I think it may have been cut from a book of prints, depicting places of historical interest and I think it very possible that some of these prints may exist in Conisbrough or neighbourhood.

“The view is taken from a point below Cadeby village, looking south, and the ruin in the foreground is doubtless what remained of St. Edmund’s Chapel or Chantry. This was an offshoot of Sprotborough Church, and its purpose was to enable wayfarers making for the Don ferry and the parts beyond to implore Divine protection from perils inseparable from such a journey in those far off times, or to render thanks for a safe return.

“A careful scrutiny of the lines on the left middle distance will indicate the Don.

” Besides the Castle and the church there Is shown a third and much darker erection which has always puzzled me. If any of your readers can identify it, I shall be glad.”

A Denaby Puzzle – Who Are The Owners Of a Church ?