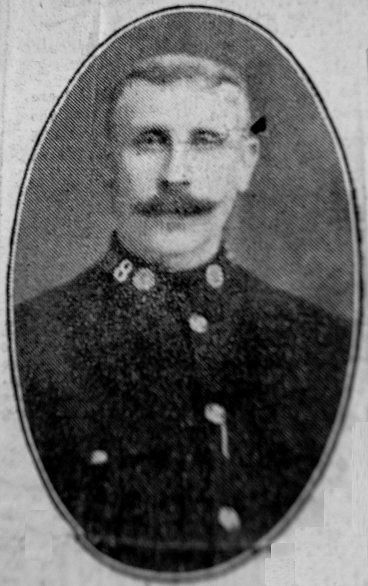 P.c. Joseph Middleton. of Denaby, dons the uniform of the police force for the last time on Monday. He is about to retire on superannuation, after over 26 years’ service in the West Riding Constabulary.

Four of these years here been spent in Denaby Main, where Mr. Middleton has earned golden’ opinions from all with whom he has come into contact with, and every good wish for his future prosperity will accompany the popular officer into his retirement.

Mr Middleton first saw the light of day at Thorne Levels, near Doncaster, where for years his family lived under Mr John Coulman, the Chairman of the son Bench, was descending, Mr J.C. Coulman, is today a well-known figure on the Doncaster West Riding Bench.

Before joining the force, Mr Middleton was groomed for two years at Squire Coleman’s, going from there to Sunil in Lincolnshire, where he was coachman for six years.

In 1883, he joined the Lincolnshire Constabulary, but the young Yorkshireman was longing for his native heath, and February 1884, son in the West Riding force at personal, in the Dewsbury division.

After a year he was transferred to Dewsbury, as orderly for Supt. Airton, and here he spent six years. While in Dewsbury he acted as orderly for the Chief Constable (the late Captain Russell on special occasion, notably Royal visits.

When the late King, as Prince of Wales, opened the new Town Hall at Leeds, Mr. Middleton formed one of his escort from Ripon station. While at this station. Mr. Middleton was complimented by the Government Inspector, Captain Clayton, on the manner in which he kept his horses and harness.

He was chief orderly when Prince Henry and Princess Beatrice open the exhibition at Saltaire, and with Superintendent Airton led the procession on the day the sod was cut in Morley Park, and later when the park was opened.

Mr Middleton was perhaps the most prominent among the rank and file of the police during the festivities when Morley was incorporated, and again when hostage was incorporated. With the superintendent, he headed the huge procession ran Batley and Dewsbury, on the occasion of the Queen’s Jubilee.

On Superintendent Airton retirement, he came to the Tadcaster division, and put in three years at Poppleton, near York, where he was complimented by the magistrates on his smart work.

At the headquarters of the Doncaster division, we finally met, where for 12 years he was orderly to the late Superintendent Blake. Here Mr Middleton was once again the recipient of congratulation from the Government Inspectors. On Superintendent Blake’s death, he continued as orderly for Superintendent Hickes for 18 months, but removed to Denaby on account of Mrs Middleton’s health.

During his career as a police officer, Mr Middleton has met with all sorts and conditions of criminals, but Jackson, the horse stealer and murder, was perhaps the most notorious character he had to deal with. Jackson had been sentenced to 18 months imprisonment for horse stealing at Ardsley, Leeds, but he escaped from Wakefield jail and went to America. The New World must have proved too hot for the ex-convict, and one night he slinked into Birstall. PC Middleton heard of the visitor, and from information received, went to certain house in a backstreet; under the couch he found Jackson and the next day he hauled him before the magistrates.

The convict was given extra time and sent to Strangeways prison, when he murdered a warden and escaped. But he was again captured and executed. This smart cop at Burston was, of course, a further in Mr Middleton’s cap, as he was then quite a young officer.

After 26 years and eight months in the force, the retiring Constable says he has nothing to regret. For his colleagues and superiors he speaks with the highest admiration. Any steady young officer with a taste for the wife well, he says, get along all right in the police force. He, by the way, could have retired 20 months ago.

Mr Middleton many friends will be glad to know that he intends making Denaby his future home. Although there are good, bad and indifferent in the village, he will tell you that Denaby people on the whole are as goodhearted as one could meet anywhere