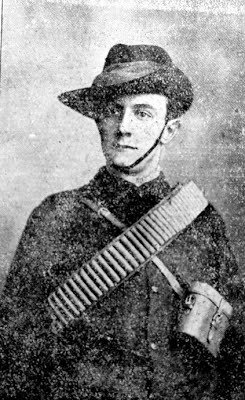 The people of Conisborough, had an opportunity on Wednesday evening welcoming home Private George Ernest Baker.

Private Baker went out to South Africa in April, 1900, with the 66th Company of Imperial Yeomanry, and shortly after landing was drafted into the 11th Company.

He saw a good deal of active service and was fortunate not be wounded. Private Baker is a third son of Mr Henry Baker, the local agent for the Old Albion Brewery Co., Sheffield. He is 20 years of age, and was born at Wath on Dearne. He finished his education and the late Mr Thompson, of Church Street, Mexborough, and subsequently held a situation as a clerk in the office of Mr Fourdrinier, Great Central Railway superintendent at Doncaster. He was in that occupation at the time he volunteered for active service.

It was the desire of the family that the homecoming should be allowed to pass off without demonstration, but Conisborough people were not disposed to so treat their only Yeoman, who has been in the war. When it became known that private Baker would arrive by the 7:15 pm train at Conisborough, the local Patriotic Committee set about making their arrangements. The streets were gay with flags and bunting. At the railway station, a handsome carriage and pair of horses, the carriage containing Mr Henry Baker, Mr Percy Baker, Miss Daisy Baker, and Mr Henry Savile was in waiting. The turnout was supplied by Mr John Williams of the Star Hotel.

As the Midland train approached the platform, the explosion of a number of fog signals denoted the arrival of private Baker as a passenger. Among the company present to join in the welcome were noticed Mr Godfrey Walker, J.P., Mr W.A.Chambers, Captain H.S.witty, and Captain W. Jones, of the Conisborough Fire Brigade.

At the appearance of Private Baker, a burst of enthusiastic applause rent the air, and a little later a most affecting incident was witnessed. An elderly lady, who had known the retired Yeoman from boyhood, managed to get close to him, and she showed her feeling of gratefulness for his safe return in motherly fashion by kissing him, the salute very properly returned by Private Baker.

At the station. Captain W.Jones offered a cordial welcome, which was heartily reciprocated. Then headed by the Conisborough United Brass Band, a procession was formed, and paraded the principal streets, the returning Yeoman meeting with a hearty reception on the way. The route taken was by Dale Road, around by the vicarage, and West Street to the Parish Church, where a special thanksgiving service was held.

On entering the sacred building Private Baker was accompanied by Miss Daisy Baker, who was appropriately wearing in her hat ostrich feathers which her brother had sent home from the seat of war.

Here the vicar, the Reverent W.A.Strawbridge, extended a cordial welcome, and afterwards, in the course of the service, Mr Strawbridge said that he was pleased to see that Mr George Baker and his friends had decided to go to church as the first act in connection with the return. That was a nice change from the social welcome that had been extended to many of the return soldiers, regulars and volunteers alike.

Trooper
Baker had participated in the magnificent service at York Minister, and in the grand military and civic function at York, but here in his old, humble church and village he must feel that the welcome was equally hearty. He went on to speak of the sturdy struggle that Englishman has always made for limited and justice, and he related on the close association of the church with the inmost life and progress of the country, and later quarter from Tennyson’s “Harold” adding that although the Normans conquered England they were in the end absorbed by the English race, and this race had asserted its supremacy in spite of everything, until it had become the great Empire that we beheld at present.

The Vicar held forth in happy strain upon the manner in which the volunteers had flocked to the old standard in a moment of great national depression and seeming disaster. Conisborough had sent forth several men volunteers and regulars and on behalf of the people of Conisborough he prayed for their safe return. Let them all pray for the blessings of peace and that the influence of Christianity might bring together those who were new enemies, so that in the future there might be a lasting peace between them.

On leaving the church another hearty ovation was accorded to Private Baker. The procession been re-formed and proceeded by way of Castle side, along the Low road, and Sheffield and Doncaster road, to Holywell house, the residence of Mr Henry Baker. There the grounds were crowded with spectators, and youths swarmed over the gateway to get a glimpse at the object of so much enthusiasm.

Return of Ambulance Man from the Front