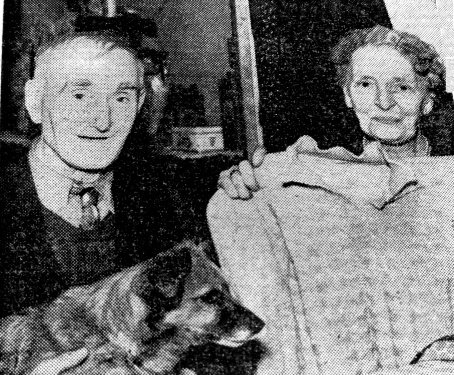 Back from Belgium after being re-united with her family for the first time for 34 years is Denaby’s ” Mrs Belgian,” Mrs Jannete Duffield, with her husband, Mr George Duffield, Sprotborough Street, Denaby. One of 52 Belgian refugees who lived in Denaby in the 1914-18 War, Mrs Duffield examines one of the gifts she received from her family. Bessie, Mr Duffield’s dog, completes the picture.

Denaby’s Mrs. ” Belgian “—Mrs. Jannete Duffield—returned to her home in Sprotborough Street, Denaby, on Friday, after seeing her brothers and sisters for the first time for 34 years.

In 1914, as a woman of 40, she escaped from Antwerp in the face of the German invaders, clad only in a nightdress and slippers.

That was her only attire when she landed in Britain, and for 34 years her family in Belgium have been searching for her. At last their task has succeeded. For three weeks they have been entertaining Mrs. “Belgian “—their eldest sister—end her husband at their homes outside Antwerp. Mrs. “Belgian” was one of the 52 Belgian refugees who found asylum in Denaby during World War I.

Her husband Mr George Duffield, for 54 years (before his retirement 18 years ago) a miner at Denaby and Cadeby Main Collieries, told me the story of the endeavours the Verswiguel family had made to trace their long lost sister.

Both Mr and Mrs Duffield are now 74.

“In 1914,” Mrs ‘Belgian’ said, “I was employed in a big hotel in Antwerp, but when the Germans came back to get out quickly, and I just managed to get a book for England. We landed in London from London Irish Blyth St, Denaby, where the miners and the colliery company looked after us.”

“You should have seen the welcome they received. We all had flagged out for them” Mr Duffield interposed.

“From the time I got away until we met again,” Mrs ‘Belgian’said “my family had been trying to find me. The last, about six months ago a friend of the family came over to London and interviewed the Belgian consul. The first we knew was when the police came to Sears and asked me if I’d been Jeanette Francisca Verswiguel. They ask other questions and then we had a letter from Belgium

“I had been so long without contact from my native land, either, that I had forgotten how to speak or read Flemish and I took the letter to a Belgian woman in Mexborough, who translated the letter and wrote a reply. In the letter from home I can only read the words ‘Annette, Florence and Juliet.’ “Unfortunately, the reply never reach the family, so I wrote in a mixture of English and Flemish but they could not make head or tail of it! Finally Mr Duffy wrote in this letter was translated and stood. We received a warming petition to go over to visit them and £22 to cover our expenses.”

On September 20th Mr and Mrs. Duffield sailed from Goole to Antwerp. There was an emotional reunion on the quayside at Antwerp.

Mrs. ‘Belgian’ said: “I was met by my sisters. Annette and Juliet, and there were some cries of what shall we do’ when we found that we could not speak Flemish and they could not speak English, but we managed all right. I soon picked up my Flemish and even my husband began to speak a few words.”

Mr. Duffield-said that they had a wonderful time. “They must have  spent £200 on us, and would not let us spend a penny.”

Mrs. Duffield was the eldest of a family of 14; four sisters and two brothers still survive and they met all the family and many nephews and nieces and their families. They travelled to Ghent to see one brother, who owns a circus and all the performers in the circus

Divorce for Denaby Main Woman – Husband’s Love for an American