Mexborough firemen had to wear breathing apparatus in order to get to a blazing first floor store room at Rossington Street Junior Mixed and Infants’ School, Denaby, shortly before midnight on Sunday, after an attempt by the school caretaker, Mr. Joseph Pears, failed.

The intense heat and flames blackened the cream painted walls, burned a 20 square feet hole through the floor, and damaged school equipment in the room, but the doors connecting the store room to the staircase and two adjoining store rooms withstood the blaze, confining the fire.

Next morning, the 600 pupils were told: “Come back tomorrow – the school is closed today.” 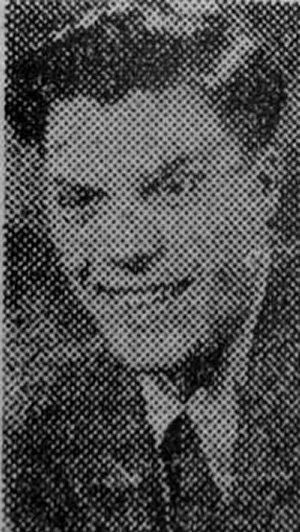 The blaze was discovered by Mr Colin Nicholson (25), (picture) colliery shunter, who lives with his parents, Mr and Mrs C Nicholson, of 24, Firbeck Street, Denaby.

He told a “South Yorkshire Times” reporter that at about 12-25 p.m., he saw a red glow in the large windows above the entrance of the school.

“At first. I thought it was tile reflection from the street lights but the light seemed to be flickerIng and I could smell burning. Another man who was passing at the time ran for the police, and I knocked up the caretaker,” he said.

Mr. Pears, who lives only a few yards from the school, was in bed when Mr, Nicholson knocked him up. “I opened the window and asked who it was,” Mr. Pears said. “He told me his name, and then said ; ‘I think the school is on fire.’ We could see the glow through the window. Another man told the police, and they sent for the fire brigade. I ran across to the school, and switched the gas and electricity off, and then tried to get to the store room, but the smoke was too thick. When the fire brigade arrived from Mexborough, the men had to put on breathing apparatus before they could get up the stairs..

On Monday morning, gas and electrical installations, which had been rendered safe by Mr. Pears’ prompt action, were inspected by officials, and the damage to the room was inspected by education authority representatives. The only visible damage from downstairs is a gaping hole in the ceiling of the entrance porch below the store room.

The headmaster, Mr. R. flail, expressed surprise that, although the heat had blistered paintwork on a door on the opposite side of the staircase, the large windows in the room had not broken, and an electric light bulb hanging from the ceiling directly shove the badly burned floor boards was still intact.