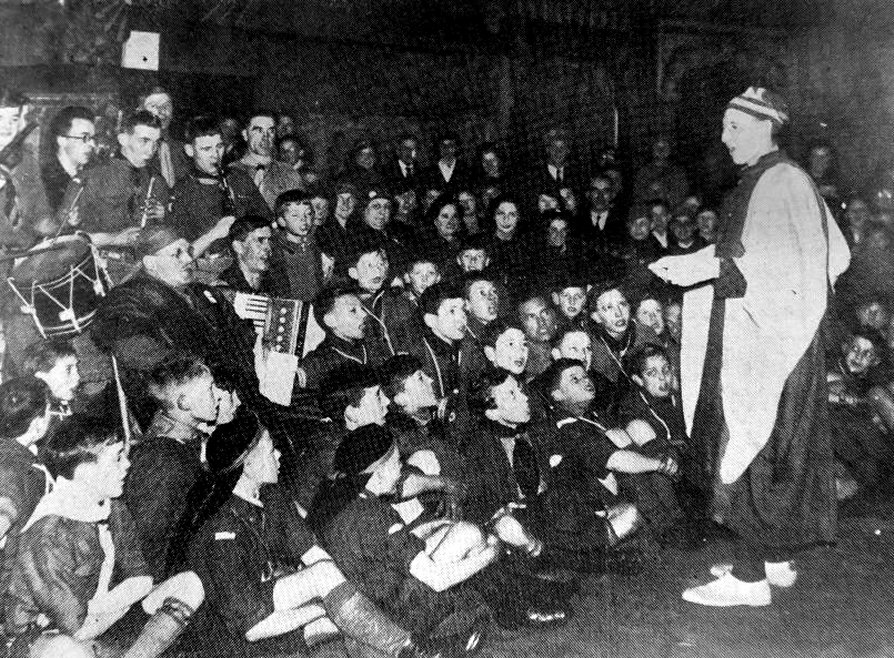 “Tongie” (Mr. N. G. Hunt) leading a rousing chorus at the camp fire at Olympia Mexborough on Tuesday.
Major M. E. Clark can be seen on the left among the boys.

Scouts in camp invariably regard the “campfire” as the happiest moment in a happy day. It is regarded almost as reverenced by every Scout from the youngest to the hardened Scouter of 30 years service.

In an attempt to show the general public what a campfire comprises and what a spirit of happiness prevails there, the newly formed Mexborough Local Association of Boy Scouts organise a demonstration in the Olympia Ballroom, Mexborough on Tuesday.

The public accepted the invitation with a will, and 800 assembled at the Olympia Ballroom, this number including about 250 Scouts.

Inside the hall there was a wonderfully realistic atmosphere., and the obvious difficulties of holding an essentially out of doors event inside, were expertly overcome. Instead of the pinewood fire, there was an arrangement of logs cunningly illuminated by electricity, which looked for all the world like a glowing fire. This was the work of Mr. Andrews, who Is electrical Engineer to the Mexborough Urban Council.

The Scouts, representing all the troops in the Association, were sitting cross-legged and wrapped In blankets round it, while the public sat behind them. The Chief of the Scouts, Major M. E. Clark, Doncaster, made an impressive figure as, robed in his ceremonial blanket, he stepped out of the shadows into the light of the camp-fire to declare the fire open in the words: “North, South. East, West; Brother Scouts, the Camp Fire is open.” Incidentally, In Scouting circles, Major Clark is known far and wide as “Puphler,” and that was the name by which he was addressed by all the Scouts present.

“Puphler” then walked majestically to his seat among the scouts, and his place In the centre was taken by Mr. Norman G. Hunt, Rover Leader of the Doncaster District, better known to those connected wi Scouting as ‘Tongie.”

“Tongie” has a wide reputation as a camp-fire leader, and never has a reputation been more deserved. His duties are to lead the community singing, to take a large proportion of solo parts. and generally to bring out the best In the boys; it will be realised, then that the success or failure of a campfire rests to a large extent on the leader. Much of the praise for Tuesday’s effort must be given to Tongie.” He was a dynamic force, possessed of an incredible amount of energy; he exuded personality, and not only was he able to give individual items of a high standard but he drove some of his own enthusiasm into the boys, and their efforts were considerably improved. Such was his control that at no time was the community singing allowed to lapse into a meaningless chanting of words as tor often does, but throughout it had a life and joyousness that was expressive of the general spirit of the evening.

The maiority of the programme was given to community singing, but individual turns were given by Scouts of the 4th Mexborough, 10th Conisborough, Denaby, 1st Swinton and Mexborough Parish Church troops. In addition, Rover Slinn, of Swinton, played several items on the piano-accordion. The singing of such rounds as “John Brown’s ‘liver,” ‘Hello!  Hello!” and “Shenandoah,” brought forth rounds of applause from the audience, who obviously derived much enjoyment from :the evening,

In a short address to the boys. Major Clark referred to the pleasure Scouts received from their camp fires in the patrol leaders’ camp at Clumber Park. He went on to give the Scouts some advice about camping in general. “Do not,” he said, “go camping unless you have made preparations a long time in advance. I do not believe that a troop ever enjoys a camp that has been arranged for it at the last moment.”

Major Clark said that camp-life was one of the most important parts of Scouting, and it was a part that was very popular with the boys, because he never saw a sad face there. He thought this was because Scouts did not go to camp merely to have a good time themselves, but to give a good time to others; this was, in fact the secret of Scouting. To the boys, he said: “If you are happy, you will make others happy. That is the point I want you to carry with you and to carry out in all your Scouting and in all your home life. Major Clark concluded by expressing the hope that this would not be the last campfire they had in Mexborough.

Mr. Thomson moved votes of thanks to: Mr. J. Guest for the loan of the hall; Major Clark for presiding; the Manvers Main Collieries for the logs for the fire; “Tongie” for leading the Scouts so effectively. the British Legion, the Social Service Centre, and the Spiritualist Church for the loan of chairs; Mr. G. W. Jepps for carting them; Mr A. R. Wood for building the fire; and Mr. E. Andrews for making the arrangements for the whole effort

Seconding this, Mr. W. P. Turner said that this would not be the last camp-fire.  He asked that the public, out of gratitude for the pleasure they had derived from the effort, should help the Local Association to help the Scouts. The Local Association, he added, was doing good work in organising Scouting in the district on proper lines. To the visitors he said “You have all seen to-night how Scouting is making these boys healthy, happy, and peace-loving; it is the object of Scouting to make them loyal citizens of this Empire of ours. I appeal to you all to help the Local Association to the best of your ability.’ Mr. Turner concluded by welcoming Mr. Thompson, and included his name among those to whom thanks were due.

Thus ended an impressive gathering which left something of a spirit stamped upon the minds of those who attended and a desire for a repetition at an early date.

Mr E. Andrews. on behalf of the committee of the Association writes expressing sincere thanks for the “invaluable and most generous help and assistance” of the proprietors of the “South Yorkshire Times,” which did so much towards assuring the success of the event.

Back from camp – Church Lad’s Brigade and Denaby Scouts

Boy Scouts in camp at Whitby