Considering the large tonnage of coal sent to Hull in the corresponding period of last year, the official return relating to the imports of coal to Hull shows a progressive trade has been done, although several of the, local collieries have not sent so large a tonnage to Hull as they forwarded last year.

Some marked changes have taken place. There were only ten collieries which sent over 10,000 tons of coal to Hull last year; and of these one was a Derbyshire firm. Two belonged to West Yorkshire, and the other seven were thick seam South Yorkshire collieries.

As a matter of course Denaby and Cadeby Collieries head the list, but the tonnage for both this month and the seven months shows a rather marked falling off. Last month the firm are accredited with 48,512 tons, against 59,040 tons last year—a decrease of 10,523 tons.

Second in position is Kilnhurst and Thrybergh Hall, but in this instance also there is a decline. Last month 16,432 tons were sent, against 16,904 tons last year—a decrease of 472 tons. The seven months tonnage reached 107,880 tons—a decrease of 11,352 tons compared with the corresponding period of last year.

The Aldwarke Main Colliery Company ranks third, being the first of the large firms which improved its position. Last month 16,120 tons were despatched, against 14,448 tons, an increase of 1672 tons. The quantity sent during the last six months reached’ only 74,624 tons, being a decline of rather over 5000 tons on the business done in 1898. Peckfield, a well-known West Yorkshire firm, rank as fourth, with 13,288 tons for July, an increase of rather more than 1000 tons. In the seven months 82,688 tons were supplied against 57.448 tons, an increase of over 25,000 tons.

Following close for the fifth position is Manvers Main Colliery Company, which last month supplied 13,256 tons, an increase of 3072 tons for the month. During the seven months the firm had a decrease of rather over 10,000 tons, the figures being 86,360 tons in 1898, compared with 76,272 tons in the present year.

The following return shows the quantity of coal despatched last month and during the seven months of the present year compared with the corresponding periods of 1896: 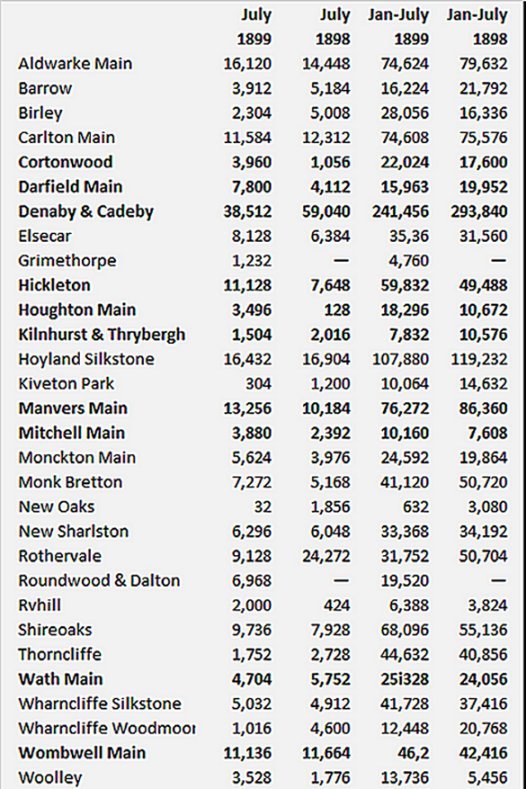