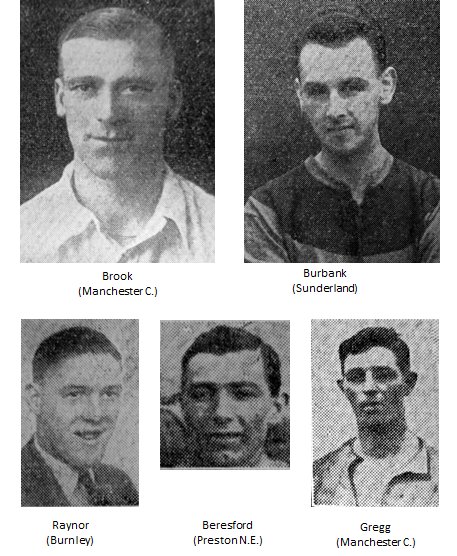 If Burbank and Berisford take the field at Wembley tomorrow they will lend another great kick to the tremendous excitement of the Cup Final for their supporters here up north.

Raynor, who is in a second season at Turf Moor, and who pleased the critics at Bramall Lane on Saturday, is a native of Goldthorpe, while Eric Brook, a member of Manchester City’s great League side this season, and whose home is, of course, at Mexborough, scored a couple of goals against the Wednesday in Saturdays all-important game.

Willis Gregg, a Manchester City signing, formerly of Accrington Stanley, was at one time a Mexborough back.

Burbank, a former Denaby United forward, has been playing consistently well with Sunderland this season.

Beresford was discovered one good Friday morning by Mexborough playing for Askern Road in a Montagu Cup Final. Subsequently spent two years with Mexborough being extremely popular at Hampden Road, before going to Mansfield and thence to Aston Villa. He is now with Preston

Raynor played at one time with Goldthorpe United, Thurnscoe Vics and then Mexborough.

Greg has been showing up well with Manchester city’s reserve side at full-back. He had spells at Chesterfield and Torquay before joining Accrington Stanley and subsequently Manchester City. Great hopes for entertain from Mexborough, where he was always stylish, cool and deliberate.

Beresford scored over 100 goals in two seasons with Mexborough in the Midland League and cup tie.