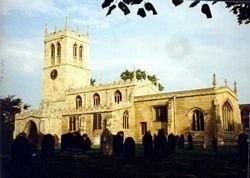 Conisbrough contains what is the oldest building still in use in South Yorkshire: the probably 8th century Anglo-Saxon St Peter’s Church. The church was enlarged in the twelfth century, and David Hey claims that it was a Minster church, forming the centre of a large, early parish covering all or much of the eleventh century Fee of Conisbrough

There is visible evidence that the church has an Anglo-Saxon core, perhaps dating from the eighth century, although it was enlarged by the Normans and then again several centuries later. Conisbrough was like Ecclesfield (now in Sheffield) and Dewsbury (in West Yorkshire), a mission church. It had at least eight of dependent churches, which in the Middle Ages became separate parishes. In the Doncaster area, these included Armthorpe, Braithwell, Fishlake, Hatfield, Kirk Sandall and Thorne.

In the 19th century the living was a discharged vicarage worth about Â£300 pa, and in the patronage of the Archbishop of York

In the church there are two early Medieval grave slabs, which once made up a tomb-chest. Although these are not pre-Conquest, they are an excellent set of carved stones – said to be the finest funery slabs in England.They from the 11th-12th century and are very richly carved. St George is depicted fighting a dragon, a human head with open mouth swallowing snakes (or snakes coming from his mouth); also warriors in combat, winged beasts, birds, foliage, zodiac signs and a bishop holding his crozier, make up just some of the decoration.

In the N chapel there is a 12th-13th century altar stone with five incised crosses carved on it and a niche for relics. This came from nearby Conisbrough Castle. And near that a 13th century cross-slab.

From the Megalithic Portal

A History of St Peter´s Church

Wulfhere the King of Mercia in 664 ad A.D. Confirmation and grant of land to St Peter’s Minster, Medeshamstede; at Conisbrough

In 1086 at the time of the Domesday Survey, the lordship of Conisbrough included lands in 28 townships scattered throughout South Yorkshire, including Anston, Aston, Aughton, Barnburgh, Bilham, Braithwell, Bramley Bramwith, Clifton, Cusworth, Dalton, Dinnington, Edenthorpe, Fishlake, Greasbrough, Hatfield, Harthill, Hoyland, Kirk Sandall, Long Sandall, Ravenfield, Stainforth, Thorne, Tudworth, Wales, Whiston and Wilsic. Some of the above had churches which were dependent on the mother church of St. Peter’s Conisbrough.

The first Earl of Warren, William, and his wife Gundreda of Flanders had issue,

Their Lands and properties included Castle Acre Norfolk and Reigate Surrey and held estates in Lewes Sussex, and Conisbrough

From before 1121 ad until the 16th century St Peter’s Church like many other Churches in the area was granted to the Priory at Lewes in Sussex.

The third priest known to hold office at St. Peters c. 1182 is the first recorded on a brass memorial plaque, at the West end of the Nave. His name was one Guy Ruffus

The half of a tomb monument at St Peter’s is thought to commemorate the 3rd Earl Warenne who died in 1148. Gundrada, his great grandmother who was buried at Lewes Priory had a carved marble gravestone

There was an agreement made by one ‘Wulfric Spot’ also 12th century. where The Manor of Conningsburgh was to supply (By demand) a share (quantity stated) of the produce and fish, to Burton Abbey. (Burton upon Trent), in return for the use of the land.

The Church was only once held under siege and this was in 1325, when a commission of enquiry was appointed because Roger de Flete a former constable of the Castle complained.

” That whereas he went to the Church of Conyngesburgh to audit the accounts of various Kings Bailiffs and to levy the Kings moneys according to his office. Alan, William, John, and Elias de Vescy and others assaulted him in the execution of the Kings business, and his men and servants, so that he lost their services for a great time, and besieged him in the Church and prevented him from doing his business. ”

Obviously a cause worthy of a tussle !

The doorway seen today was in place at the time of this siege. Either side of the doorway are pockets which would allow a wooden bar to be placed, barring the doors from opening. Unfortunately for the accused the spiral stair had not yet been added.

In 1672 a Test Act was decreed in which a Sacrament certificate proving that an individual has received Holy Communion according to the usage of the Church of England, which was required from all those appointed to public office in England in the period 1672-1828.

From 1450 until 1866 is St. Peters ‘ 400 silent years’ . There is very little evidence of any alterations to the Church during this period, barring the Iconoclasm as already mentioned.

Endorsed Mr Ward Minister of Conisbrough his Note of Castle Farm Tythes with a receipt for the transcription from W S Heaton.

In 1822 at the time of Rev Thos Braithwaite curate, George Haigh was the parish clerk

In 1831 James Alexander esq Doncaster possibly was the subscriber for the following entry in the Lewis Topographical Dictionary .

CONISBROUGH, a parish in the southern division of the wapentake of STRAFFORTH and TICICHILL, West riding of the county of YORK, 65 miles (N. E. by E.) from Rotherham, containing 1142 inhabitants. The living is a discharged vicarage, in the archdeaconry and diocese of York, rated ir . the Icing’s books at Â£8.12.8|-. and in the patronage of the Archbishop of York. The church, dedicated to St. Peter, is of Norman character, combined with the early, the decorated, and later style, of English architecture : it had a chantry, founded in the 14th of Edward II.: there are several monuments, together with a curious stone, adorned with many hieroglyphics. There is a place of worship for Wesleyan Methodists. A schoolroom was erected upon waste land by subscription in 1812 amounting to Â£7. 10. per annum, arises from the rent of the old school premises, and an. endowment of Â£2 a year. This is a place of high antiquity, having been connected with all the different dynasties by which Britain has been governed. The Britons called it Caer Conan; the Saxons Cyning, or Conan Burgh, both signifying a royal town. A Roman road is discoverable not far hence. Conisbrough is stated to have been the seat of a civil jurisdiction, which comprised twenty eight towns. The castle, standing upon an eminence above the river Don, is of uncertain foundation some consider it to have been built by Queen Cartismandua, others by the Romans, and others again by the Saxons. It is first mentioned as a fortress belonging to Hengist, the Saxon leader, who was defeated here, in 487, by Aurelius Ambrosius, and again in 489, at which period, according to Geoffry of Monmouth, he was made prisoner, and subsequent beheaded at the northern gate of the citadel; a tumulus near the place is stated to cover his relics. This account, however, has not been universally credited : there can be little doubt that a fortress existed here previously to the Conquest but the structure, the ruins of which now constitute so interesting an object, was probably erected by Earl Warrenne, to whom the Conqueror gave the manor. In this castle Richard, Earl of Cambridge, second son of the Duke of York, and grandson of Edward III., was born; he was beheaded for conspiring against Henry V. The round tower, or keep, is almost perfect; the rest forms a picturesque ruin. Several human skeletons have been discovered

A document from Queen Victoria, at ‘Court’ at Windsor, c 1894 (It has the precise date on it), where she grants Conisbrough Churchyard, a ‘closed Churchyard’ status, stating that only in exceptional circumstances would future burials be allowed in the Churchyard. What this did for the Church, is to pass responsibility for it’s upkeep, to the Local Authority. (The said Conisborough Urban District Council). This document was found in a recent dispute with Doncaster Metropolitan Borough Council 2001/3, who took over from Conisbrough Urban District Council in the1970’s, when they tried to deny responsibility for the upkeep of the Church.

There is a Tittlecock’ Fair, held in Conisbrough which seems to be of unknown origin that takes place on Good Friday. A large wooden cross is borne in a procession to the Parish Church, where a mid-day service is held