Swinton and Conisbrough ” Gunners ” are in Korea 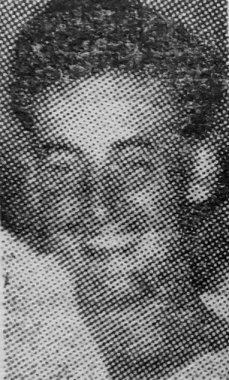 Two South Yorkshire soldiers, Bdr. James Launders (26), of 64, Brookfield Avenue, Swinton, and Gnr. Jack Brooke (picture)  (22), of 110, Daylands Avenue, Conisbrough, are now probably at grips with the Chinese Reds on the Eastern Front in Korea. They have been out there with the 27th British Commonwealth Brigade since early September.

News of their association with the Brigade reached the ” South Yorkshire Times” this week from Bdr. J. Burnip, of the Independent A/TK Tp., Royal Artillery,   27th British Commonwealth Brigade.

Gnr. Brooke’s mother received a letter from her son on Friday. He wrote then: “Everything is quiet here. We are waiting for the Chinese to make up their minds.

They want to hurry up and let us get away from this place I think they will wait until after Christmas before they move.”

That is about all Mrs. Brooke knows of her son’s activities in the fighting line. That he is in the fighting she feels sure, although she is thankful that at least the 27th Brigade is not apparently as active as the 29th Brigade.

He is well looked after, has plenty of food, but has never written to her telling her any details of the fighting. “He won’t worry me,” she said on Wednesday. ” He never complains, never grumbles, but just makes the best of a bad job.”

Jack Brooke first worked at Cadeby Colliery after he had left Conisbrough Modern School. The week before he was 18 he decided to join the Army. He thought that by volunteering he would have a chance of joining any regiment he wished, and he wanted to be in the Royal Engineers. His father, the late Mr. George Brooke, served with the Engineers in the first world war, and his brother George was with them as Q.M.S. for eight years in the last war. But Jack was drafted to the Royal Artillery.

For six weeks he trained locally. Then he was posted to Germany and was there for about a year. He came back to England, was posted to Scotland, caught pneumonia and shortly after his recovery was home on embarkation leave.

Jack hopes it will be his last Christmas in the East. He is due to leave the Army this year. When he gets home one thing is certain. “He won’t go down the pit,” says his’ mother,” and he won’t stay on in the Army.”

Throughout the Korea campaign, letters home from Bombardier James Launders have brought cheerful news to his wife and mother at 64, Brookfield Avenue, Swinton. But the happiest news is expected “sometime this year,” when Bombardier Launders is due home for the first time in two years.

One of the first into Korea from Hong Kong, he is serving as an artificer with the Royal Artillery. He has behind him at 26 twelve years of army training, for he entered Woolwich Military College straight from Mexborough Grammar School and thus followed in his father’s footsteps. An ex-Grenadier Guard his father also chose the Army as a career.

Three years ago he married Miss Joan Balcon, of Kent, who is now living with her husband’s parents, Mr. and Mrs. J. Launders.

Royal Artilleryman wrote this to us from Korea:

“While reading the account in your paper of the first man in your district to volunteer for Korea it struck me that it may interest some of your readers to know that we have two men in this troop from Mexborough and Swinton area.

Bdr. Jimmy Launders and Gnr. Jack Brooks have been out here with the 27th British Commonwealth Brigade since early September. Previous to this they had served a year in Hong Kong with a Mortar Bty. It is not a widely known fact that there are Royal Artillery personnel with the Brigade in Korea, but the area is well represented for there is only an `Independent’ troop here.

“Hoping that this may prove of some interest, I wish the paper, staff and readers all the best in the coming year.”

Out In Korea – Conisbrough Gunner Moving to the Front